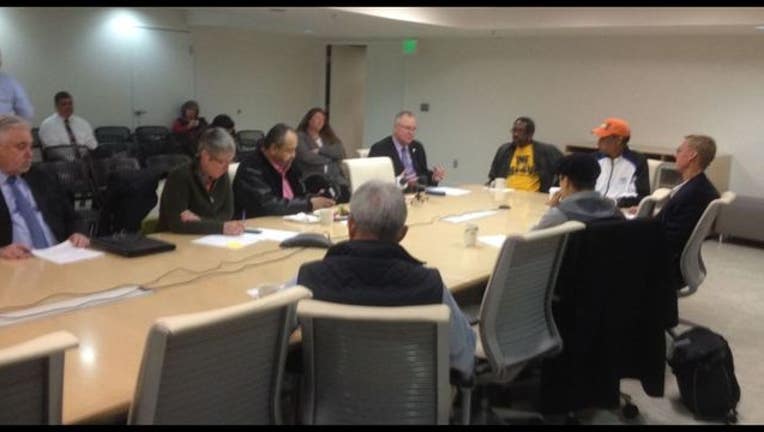 OAKLAND, Calif. (KTVU) - The board that oversees the Oakland Coliseum complex voted today to approve an agreement to extend a lease agreement that will keep the Oakland Raiders at the O.co Coliseum for at least one more year.

The agreement that was approved by the Joint Powers Authority also includes two additional one-year extensions that could keep the Raiders in Oakland for the 2017 and 2018 football seasons as well.

Today's action approves a tentative agreement that city of Oakland and Alameda County officials, who oversee the Coliseum complex's operations, and the Raiders announced on Feb. 11.

The pact calls for more than tripling the amount of rent the Raiders will pay to the city and county for using the O.co Coliseum and their publicly-owned training facility in Alameda from $925,000 to $3.5 million.

JPA spokesman Dan Cohen said the increase will cover the costs the city and county incur on the days of football games.

The lease must now be approved by the Oakland City Council and the Alameda County Board of Supervisors when they consider it at meetings in the next few weeks.

The JPA said the Raiders and the city and county are still actively discussing longer lease extensions as well as the possibility of building a new football stadium at the site.

Raiders owner Mark Davis has explored the possibility of moving the team to other cities such as Los Angeles, San Antonio and Las Vegas but when the tentative lease extension was announced last month he said it would give the team the chance to work out a deal with the city and county to build a new stadium that would keep his team in Oakland for the long term.

Oakland City Councilman Larry Reid, who chairs the JPA, said in a statement, "We are pleased that this agreement recognizes that the Oakland Raiders are a crucial part of our local sports economy."

Reid said, "Working together with the team and our community partners, we now go back to work to create a longer-term agreement for a permanent home for the team."

Alameda County Board of Supervisors President Scott Haggerty, who serves on the JPA's board, said, "We are thankful that our collaboration with the leadership of the Raiders has yielded this agreement. Mark Davis,
(Raiders President) Mark Badain and the Raiders have continually said they want to be in Oakland and the JPA has continued to work hard to make that happen."

JPA Executive Director Scott McKibben said, "The Oakland Raiders have shared that Oakland is, was, and will be their first choice. We are pleased to have worked together to form an agreement."

McKibben said, "We await speedy approvals at the city and county and then together we can pivot to find a long-term solution."