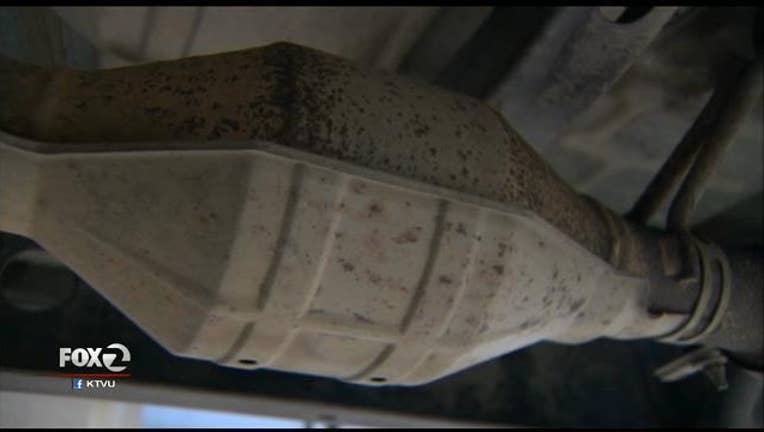 SONOMA COUNTY, Calif. (KTVU) - A rash of thefts in Sonoma County is leaving vehicle owners with an expensive repair bill.

More than 30 catalytic converters have been stolen, over four nights, most of them in the town of Windsor.

"That's the gap, they unbolted it and just dropped it," resident Matthew Melchiori told KTVU, as he showed photos of the damage to his 2011 Dodge Diesel truck.

It required $3,400 in repairs after thieves detached it from the undercarriage, and left the fasteners where they fell in the driveway.

"Any time someone violates your privacy and your things, it's upsetting, but hopefully insurance will take care of it," said Melchiori.

Insurance claims are going in across Windsor, where 22 catalytic converters have been stolen since Sunday night, by thieves who slip underneath the trucks and SUV's as their owners sleep.

"Somebody's buying it, somebody's paying them for it," declared Carpenter, "and it's quick and easy. They have a metal saw, they make a couple of cuts, and probably in less than 30 seconds they're gone!"

Auto shops see this crime periodically, and it sometimes happens in broad daylight to cars parked in garages, malls, schools, and park and ride lots.

"People feel so violated," Dianne Lopez, service manager at Novato Toyota observed. "They park their car for lunch, or to go to work, and they come back and it scares them to death when they start the car because it's so ungodly loud."

"I went to start it and it just sounded like an explosion, or a NASCAR," Windsor theft victim Sheri Wenzel told KTVU, describing her 2001 Toyota Sequoia vandalized Sunday night.

"It had very minimal power, and it was so loud it was embarrassing, I just couldn't drive it, I had to turn around and come back and have it towed."

Now, Wensel is driving a service loaner, parked in the same spot her SUV was. Parts alone for the Sequoia repairs are close to $5,000.

"They're pretty brazen these guys," signed Wenzel, "these guys are good. They obviously can get in and get out really fast."

Victims hope the thieves are caught almost as fast. Until then, residents who own truck and SUV's with a high clearance are advised to park them in a garage, so they are out of reach.

Matt Melchior says his mechanic not only bolted, but welded, his new catalytic converter on. With a saw, it can still be stolen, but not as easily.

"I can't worry about it," said Melchior, "it's not something I can do anything about."

The thieves also struck in the Larkfield area and the Sonoma Valley.

Investigators are looking for surveillance video, and monitoring for any unscrupulous transactions at metal scrapyards.