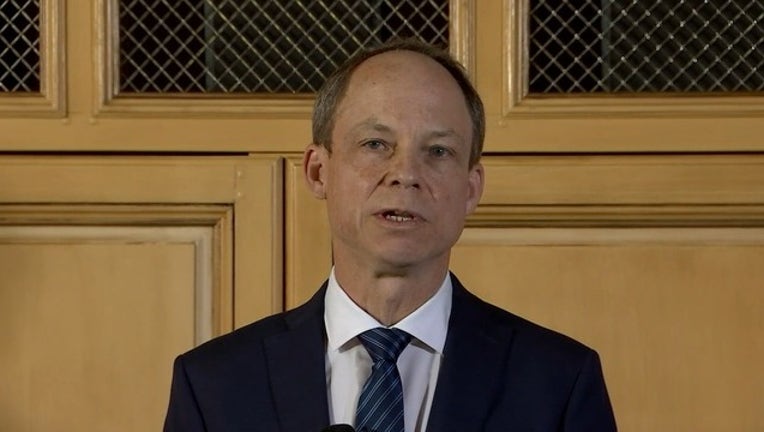 Santa Clara County Superior Court Judge Aaron Persky speaking for the first time since a recall effort began against him two years ago, seen here in a May 8, 2018 photo.

OAKLAND, Calif - The Santa Clara County superior court judge who was recalled from the bench after he handed down a controversial sentence to a former Stanford University swimmer is asking for donations to pay $135,000 in legal fees.

Former Superior Court Judge Aaron Persky this week sent an email called “A Final Ask,” pleading with supporters for donations because a campaign account to fight the recall is now empty.

Persky worked to prevent his recall over the six-month sentence he gave to former Stanford swimmer Brock Turner, who was convicted of sexually assaulting an intoxicated, and unconscious woman outside a university fraternity party in 2015.

But he was ousted from office following a June special election when 60 percent of Santa Clara County voters who went to the polls agreed to the recall.

In the email obtained by KTVU, Persky requests contributions towards paying $135,00 in court-ordered attorney fees arising from the recall effort, which he called a “well-funded, misleading, and extremely negative campaign by recall proponents.”

Persky racked up legal fees after he petitioned the court to agree that superior court judges are state officers for the purposes of recall, as opposed to local elected officials, such as city mayors.

“I pursued the litigation so that superior court judges would benefit from the same procedural protections as other state officers who face recall elections,” Persky wrote in the email to supporters.

Recall proponents, represented by a California law firm, prevailed in the litigation and the firm filed a motion for attorney fees.

"They claimed they were entitled to fees because they and their clients had acted as a “private attorney general,” vindicating the right of voters to recall a superior court judge, Persky explained in his donation request email.

The attorney fees order is due by Dec. 31, according to Persky.

Michele Dauber, a Stanford University law professor who led the recall campaign, said Persky needs to be held accountable for the fees.

“Judge Persky made the bad decision to repeatedly file frivolous lawsuits and appeals with the goal of stalling and causing expense,’’ she said in an email to KTVU.  “The court has concluded that he should be required to pay for that decision, and we are happy that our lawyer will be getting paid for his outstanding work in defending our constitutional rights, and those of the voters of Santa Clara County.”

The attorney who represented him in both his court battle against the recall and his unsuccessful bid to avoid paying proponents legal costs, told the Mercury News that the request for financial help was not out of line.

“There’s nothing wrong with asking people, and people will pay or they won’t,” said attorney James McManis, “I hope this works out for him. He’s been punished more than enough.”

In an email to KTVU, McManis, disagreed with Dauber's calling the lawsuits "frivolous."

"Superior Court judges are state officers, regardless of the counties where they serve.  And as such, recall efforts should be subject to the agency overseeing state officers, namely the Secretary of State. It was, and it is, an honorable argument, which the court regrettably rejected.  It was hardly frivolous,'' he said.