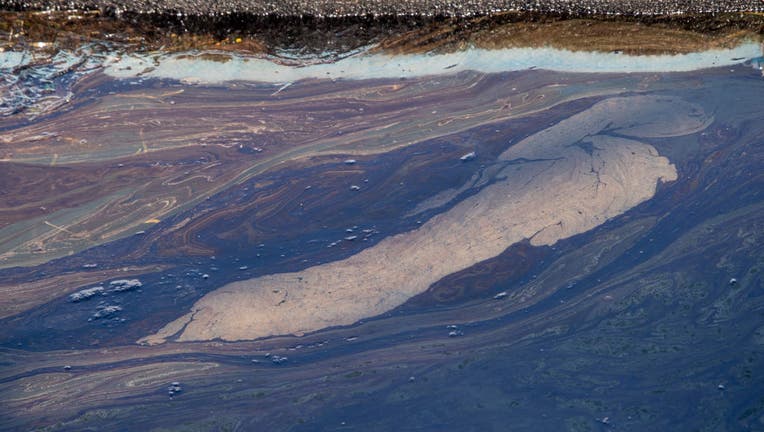 Huntington Beach, CA - October 03: Detail of oil flowing through the Talbert Channel, gathering on an absorption boom that helps stop the flow into the ecologically sensitive Talbert Marsh as a major oil spill washes ashore at Huntington State Beach

HUNTINGTON BEACH, Calif. - Records show the U.S. Coast Guard received a report of a possible Southern California oil spill more than 12 hours before a pipeline company reported it and the Coast Guard launched a cleanup effort.

State reports reviewed Monday by The Associated Press raise questions about the Coast Guard's response time as well as how quickly Amplify Energy, recognized it had a problem with its pipeline and notified authorities.

Officials say they're investigating whether a ship's anchor may have struck the pipeline on the ocean floor.

The pipeline company responsible for the Huntington Beach oil spill's president said divers will be sent to inspect the area where the leak happened. Meanwhile, the Orange County district attorney said no employee should be allowed to inspect the leak and that it should be done independently and that he will be looking into possible criminal charges.

The spill sent up to 126,000 gallons of heavy crude into the ocean. It contaminated the sands of Huntington Beach and other coastal communities.

The company suspected in the spill had dozens of violations.

By Monday night, Gov. Newsom proclaimed a state of emergency to assist with the response to the spill.