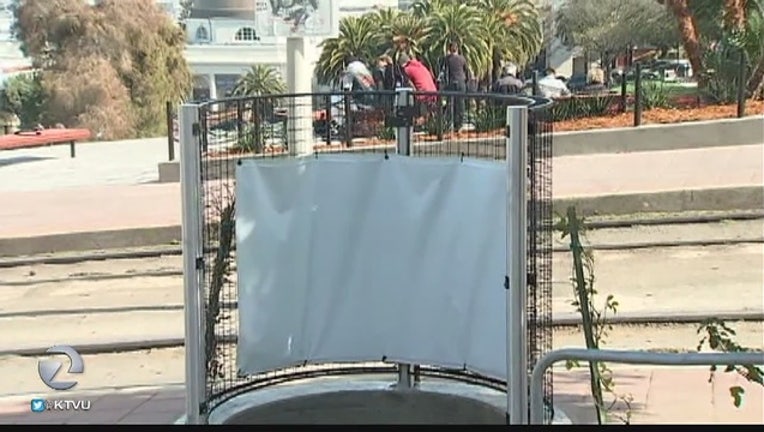 SAN FRANCISCO (BCN)— A religious group has moved ahead with a threatened lawsuit against the city of San Francisco over an open-air urinal or "pissoir" recently installed at Dolores Park.

The lawsuit filed by the San Francisco Chinese Christian Union and four individuals on Thursday in San Francisco Superior Court alleges that the pissoir, located near a J-Church light-rail line stop on the edge of the park, violates laws regarding privacy, sex discrimination, public health, access for persons with a disability and the plumbing code.

One of the plaintiffs, Patrick Sullivan, is described in the lawsuit as living across the street where he can see people using the pissoir from his kitchen window.

In a statement issued late Friday, the City Attorney's Office noted that the law firm representing the plaintiffs, the conservative nonprofit Pacific Justice Institute, is considered an "anti-LGBT hate group" by the Southern Poverty Law Center.

"If I had to predict the top 100 things in Dolores Park likely to offend these plaintiffs, I wouldn't have guessed that this would make the cut," Dorsey said.

The pissoir was installed as part of an extensive $20.5 million renovation project at Dolores Park just completed in January. The renovation project included new picnic areas, an off-leash dog park, a scenic overlook at 20th and Church streets, repairs to tennis, basketball and multi-use courts -- and the construction of new restroom facilities.

The popular and heavily-used park now has 27 toilets in addition to the outdoor urinal, as compared to the four it had previously, according to rec and park officials. The pissoir was installed in response to neighborhood complaints about public urination by park goers in the area.