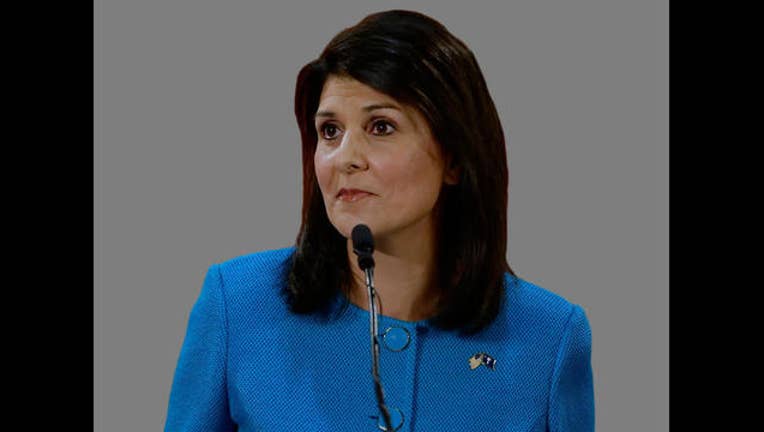 Yet it was Rubio who may have scored the day's biggest win as he secured the coveted endorsement of South Carolina Gov. Nikki Haley. The popular governor said she was tasked with identifying the best candidate as she surveyed the crowded GOP field.

"If we elect Marco Rubio, every day will be a great day in America," she said alongside the Florida senator during an evening rally in suburban Columbia.

While a major development, Haley's endorsement did little to quiet the intensifying clash between Cruz, Trump and Rubio over alleged ethical violations in the days leading up to Saturday's South Carolina contest.

The Texas senator has been trying to beat back charges of dishonesty from Trump and Rubio for weeks. He shifted his defense to the next level during an afternoon news conference that highlighted Cruz's extensive legal training.

"You have been threatening frivolous lawsuits for your entire adult life," said Cruz, a Harvard Law School graduate who served as Texas' top lawyer, speaking directly to Trump. "Even in the annals of frivolous lawsuits, this takes the cake."

Trump threatened earlier in the week to bring a defamation lawsuit against Cruz over a television ad that attacks the Republican front-runner's conservative bona fides. Specifically, the ad features footage of the billionaire businessman in a 1999 interview supporting abortion rights. Trump now says he opposes abortion.

Trump's attorney sent Cruz a letter Tuesday charging the ad was "replete with outright lies, false, defamatory and destructive statements" and saying Cruz could be held liable for damages if it's not taken down.

Cruz on Wednesday said a lawsuit against the ad has no chance, and said he would like to take Trump's deposition himself. He also announced plans to run the contested ad more frequently.

Polls suggest Trump continues to hold a big lead in South Carolina and in upcoming states, as Cruz works to rally the Republican Party's most conservative wing and Rubio tries to consolidate mainstream Republicans behind his candidacy. Former Florida Gov. Jeb Bush and Ohio Gov. John Kasich continue to battle for a spot at the table, while retired neurosurgeon Ben Carson struggles for relevancy.

Haley's endorsement was a major setback for Bush in particular, who told NBC News on Monday that "she is the probably the most meaningful endorsement if there is" one in the state.

"It's just a pattern of people around his campaign that have continuously done things like that," Rubio said as he campaigned in Mount Pleasant.

Cruz denied being involved with anything untoward and called for anyone with evidence to come forward.

Trump and Rubio are "repeatedly putting forth fabrications with no evidence, no basis whatsoever, just trying to throw mud and attack," Cruz said. "The insults and the falsehoods and the fabrications have no business in politics. It is incumbent upon all of us to speak the truth."

"I am pro-life and I do not support taxpayer funding for Planned Parenthood as long as they are performing abortions," Trump said in a statement.

The New York real estate mogul also repeated his threat to bring a lawsuit over Cruz's eligibility to be on the ballot, given that he was born in Canada. Cruz and legal experts have said he is eligible because his mother was a United States citizen at the time of his birth.