Republican senators and representatives who have medical degrees urged Americans to get the coronavirus vaccine in a video released on April 27, 2021. Credit - Dr Roger Marshall via Storyful

WASHINGTON - Several Republican lawmakers with various medical degrees urged Americans to get vaccinated against COVID-19 in a new video — part of a larger, ongoing effort to get more shots in arms as demand sags.

The group of lawmakers, which included former or current doctors, dentists and registered pharmacists, encouraged supporters to get the vaccine in the public service announcement shared Tuesday.

"Now we, the American people, have the opportunity to achieve peace of mind," Rep. Greg Murphy, R-N.C., who is also a urologist, says in the video.

"...And live life as free as before by choosing to receive a COVID-19 vaccine," registered pharmacist, Rep. Buddy Carter, R-Ga., continues in the ad. 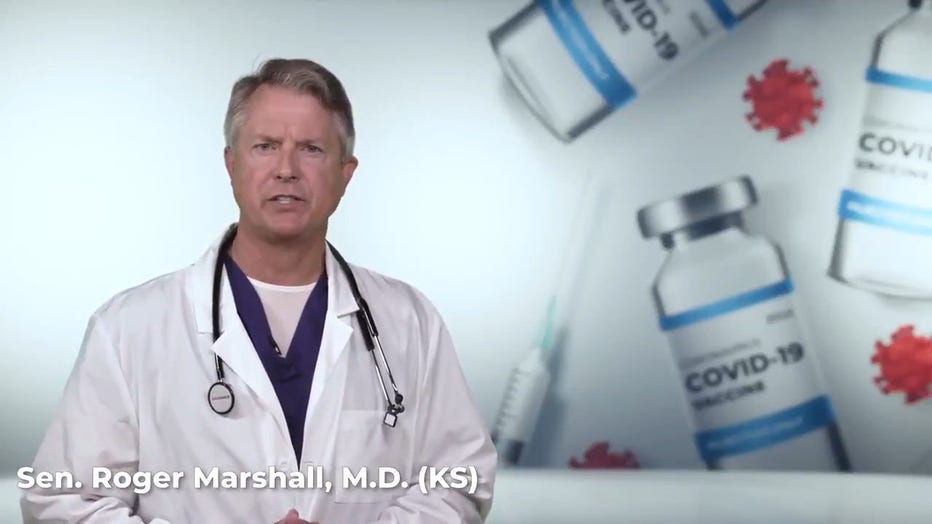 Sen. Roger Marshall, R-Kansas, is pictured in the video encouraging Americans to get vaccinated against the virus. Marshall is also a doctor who practiced as an OB/GYN for more than 25 years, according to his website. (Credit: Dr Roger Marshall via S

The lawmakers go on to tout the safety and effectiveness of the three approved vaccines by Pfizer, Moderna and Johnson & Johnson, which are currently being administered in the U.S. They add that the Food and Drug Administration "got the job done" in record time by cutting "bureaucratic red tape — not corners."

"The process was rigorous and transparent, and a process that I personally followed very, very closely," said Rep. Brian Babin, a dentist and Republican lawmaker from Texas.

More than half of American adults (54%) have received at least one vaccine dose, data from the U.S. Centers for Disease Control and Prevention shows. Roughly 37% of adults are vaccinated in the U.S.

The public service announcement by the conservative lawmakers is notable, as polling by Pew Research and other organizations have found somewhat of a partisan difference in vaccine intent.

Pew reported in March that a growing share of Americans said they planned to get the vaccine, but among political parties — Democrats were 27 percentage points more likely to get inoculated against the virus than Republicans (83% to 56%).

At the same time, there’s been a marked drop in demand for the shots with some places around the country even needing to turn down shipments due to little interest.

"It is kind of stalling. Some people just don’t want it," Stacey Hileman, a nurse with the health department in rural Kansas’ Decatur County, told the Associated Press last week. Less than a third of the county’s 2,900 residents had received at least one vaccine dose.

The Biden administration is now tasked with finishing the nation’s mass vaccination campaign, overcoming lagging demand and communicating in clear terms what activities can be safely resumed by those who are vaccinated.

On Tuesday, President Joe Biden spoke about the CDC’s updated guidance, which said fully vaccinated Americans do not need to wear masks outdoors anymore unless they are in a big crowd of strangers.

"This is another reason to go get vaccinated now," Biden said. "Go get the shot. It's never been easier."