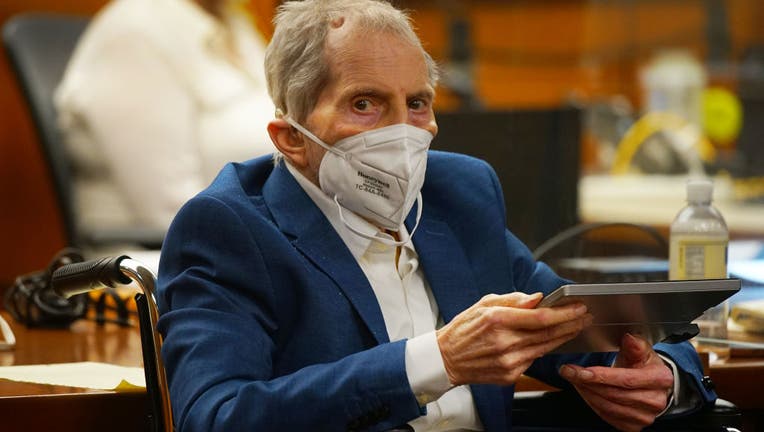 Robert Durst during court proceedings in his murder trial at Inglewood Courthouse on May 18, 2021, in Inglewood, California. (Pool Photo/Getty Images)

The second-degree murder indictment in the New York City suburbs comes weeks after an investigator in the case filed a criminal complaint against the 78-year-old Durst, who was recently sentenced to life in prison in California for killing a confidante who helped him cover up the slaying.

Durst was transferred to a state prison medical unit last week less than two weeks after being hospitalized on a ventilator with COVID-19 following sentencing in the Los Angeles case.

A warrant has been issued for his arrest in the killing of Kathie Durst, Westchester County District Attorney Mimi Rocah said in a statement announcing the indictment.

"When Kathleen Durst disappeared on January 31, 1982, her family and friends were left with pain, anguish and questions that have contributed to their unfaltering pursuit of justice for the last 39 years," Rocah said.

Kathie Durst's 1982 disappearance garnered renewed public interest after HBO aired a documentary in 2015 in which the eccentric heir appeared to admit killing people, stepping off camera and muttering to himself on a live microphone: "Killed them all, of course."

Kathie Durst was 29 and in her final months of medical school when she was last seen. She and Robert Durst, who was 38 at the time, had been married nearly nine years and were living in South Salem, a community in Lewisboro. Her body was never found. At the request of her family, she was declared legally dead in 2017.

Robert Durst's family owns more than 16 million square feet of real estate in New York and Philadelphia, including a 10% stake in One World Trade Center, the Manhattan skyscraper formerly known as the Freedom Tower. Family members bought out Robert Durst's stake in the business for $65 million in 2006.

In the 2015 HBO documentary "The Jinx: The Life and Deaths of Robert Durst," Durst appeared to admit killing people and admitted he made up details about what happened the night she disappeared because he was "hoping that would just make everything go away."

Durst, who has numerous medical issues, sat in a wheelchair for much of the California trial and sentencing hearing. He read his lawyer's questions from a tablet giving live transcriptions because he struggles with hearing.

Durst, testifying in the Los Angeles trial in August, denied killing Kathie Durst. After her medical school called to report that she hadn't been going to class, he said he figured she was "out someplace having fun" and suggested that perhaps drug use was to blame.

"It hadn't occurred to me that anything had happened to her," Durst said, speaking slowly in a strained, raspy voice. "It was more like: What had Kathie done to Kathie?"

Asked if he had any reaction to the indictment, Durst lawyer Chip Lewis replied in an email: "Fake news!"