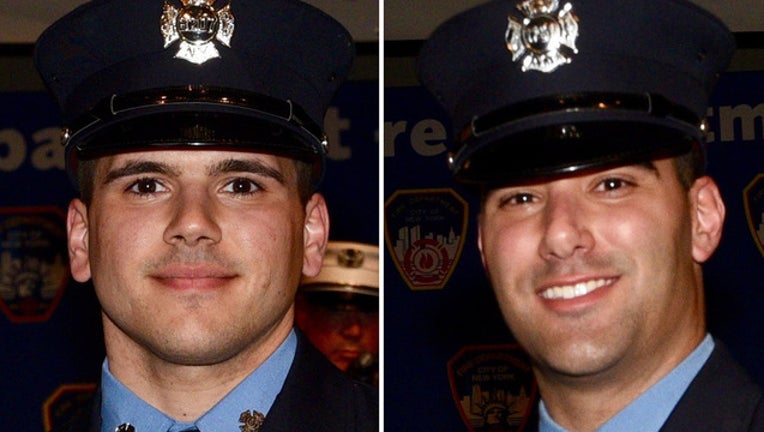 Christopher Rossi (left) and Dominic DiBiase (right) of the FDNY.

NEW YORK (FOX5NY) - Two rookie firefighters, along with a veteran FDNY captain, are being called heroes for saving a mother and her two small children from a fire early Thursday morning.

It happened in a basement apartment in Brooklyn and was the first fire for one of the firefighters.

When the firefighters from ladder Company 149 showed up to the 64th St. fire people were screaming in the driveway that there was a baby in the basement.

Captain Christpher Kane says he knew they had to get in quickly but the fire rolled over their heads as they tried to enter the building.

Probationary Firefighter Dominic DiBiase used a fire extinguisher to just barely allow them to make a push into the back bedrooms.

Once inside the bedroom, they found two of the family members but conditions were rapidly deteriorating.

They shut the door and had the window bars removed, and passed the patients up over the top of the wall to get them out.

FDNY Probationary Firefighter Dominic DiBiase pushed into the next bedroom and found the third victim.  He took them to the same window to get them out of the home.

The patients were transported to local hospitals in serious condition.  The cause of the fire is under investigation.

Rossi had just graduated from the academy and was fighting his first fire, according to the Daily News.