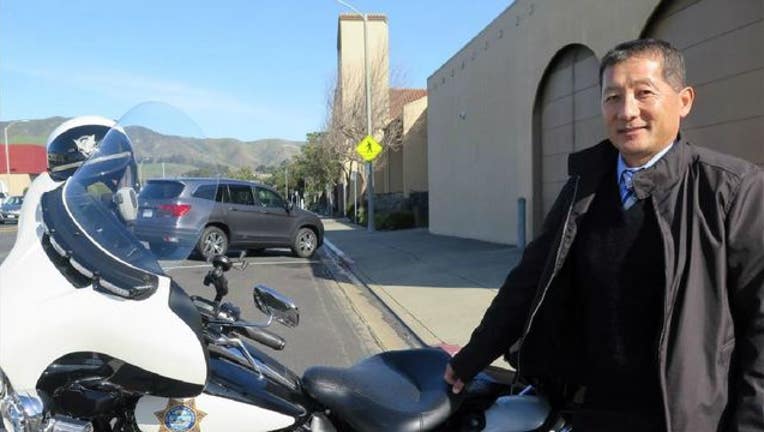 SOUTH SAN FRANCISCO - A South San Francisco police officer has returned back to work after being attacked and critically wounded by a skateboarder on Thanksgiving day in 2016.

The South San Francisco Police Department welcomed officer Robby Chon back by posting of photo of him on Facebook proudly standing next to a police motorcycle with the caption "Our hero has returned! With the support of family, friends and the community, Robby fought back through a year of multiple surgeries and hours upon hours of rehabilitation in his desire to return to duty to serve our citizens. Robby’s tenacity and determination to overcome the odds defines what it means to be a hero in blue. Please help us welcome Robby back to our community!"

Fellow Officers describe Chon as an all-around good guy. At the time of the incident he had been on the force for 12 years. He returned to work on light duty.

When Chon was brutally attacked and knocked unconscious by a man with a skateboard, it was crushing to the tightly knit police department.

In an interview toward the end of November of 2016 Sergeant Ken Chetcuti said, "The mood around here has been very somber since." Chetcuti had worked side by side with Chon over the years. "We're a brother and sisterhood of law enforcement and when one of our own goes down on a holiday, it's pretty traumatic."

The 2016 assault happened on the 200 block of Grand Avenue. Police say Chon was chasing 28-year-old Luis Ramos-Coreas, who had taken off on a skateboard when officers approached him for causing a disturbance. The suspect then allegedly hit Chon in the head with his skateboard.