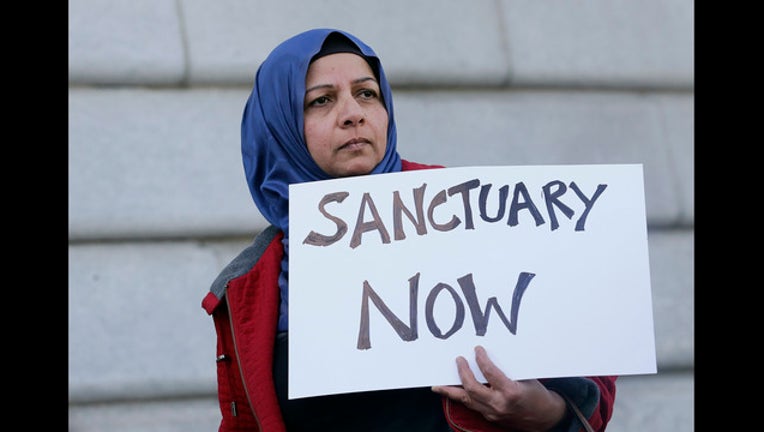 Moina Shaiq holds a sign at a rally outside of City Hall in San Francisco, Wednesday, Jan. 25, 2017 (AP Photo/Jeff Chiu)

The city of Salinas has decided to become the third Northern California local government to sue President Donald Trump over an executive order that would deny federal funds to sanctuary cities, counties and states.

The vote to sue was unanimous by the six council members present. Trump's order would withhold federal funding from local governments that the Trump Administration deems to be "sanctuary jurisdictions" that shield undocumented immigrants from deportation by federal authorities.

Although Salinas has not declared itself a sanctuary city, Callihan and Mayor Joe Gunter said they feared the city may nevertheless be at risk of losing its $10 million in annual federal funding, including funds for road repairs and firefighter positions.

"The city is seeking to protect not only the ... millions of dollars in federal funds the city receives each year, but also to protect all its residents, regardless of their immigration status," Gunter said at a news conference Tuesday.
Callihan said he expects to file the lawsuit in the U.S. District Court for Northern California within the next several weeks.

San Francisco and Santa Clara County have previously filed similar lawsuits. Both those cases have been assigned to the same judge, U.S. District Judge William Orrick of San Francisco, for purposes of judicial efficiency.

Orrick is scheduled to hold a hearing April 5 on Santa Clara County's motion for a nationwide preliminary injunction blocking implementation of the order.

The city of San Francisco today asked for a similar preliminary injunction hearing before Orrick on April 12.

The U.S. Department of Justice has said it will respond to the lawsuits in court. Gunter said, "The City Council did not take this issue lightly."

But he said, "Salinas, like most of Monterey County, is dependent on the agricultural economy. That economy is supported by immigrant workers who may or may not be in this country legally."

He continued, "The city should not get into the middle of that discussion, since that is a matter for the federal government to handle. If those hard-working families are ripped apart and deported, not only will they suffer, but the local economy will suffer -- all of us will suffer."

The cities of New York and Los Angeles have also sued Trump to challenge the order in their local federal courts.