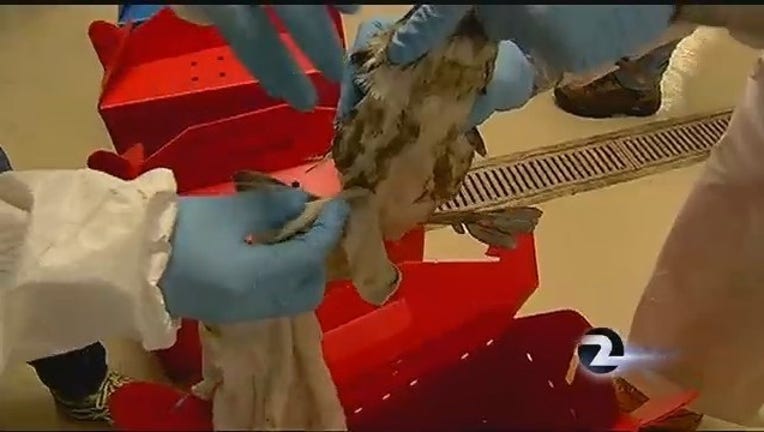 The International Bird Rescue in San Francisco said that so far 154 seabirds have been cleaned, rehabilitated and returned to the wild.

A total of 493 birds were affected by the goo, which has not yet been identified.

The California Department of Fish and Wildlife found 170 of them already dead. Another 150 birds were dead on arrival or humanely euthanized, according to International Bird Rescue.

More than 70 percent of the birds were surf scoters, but those affected included horned grebes, buffleheads, common goldeneyes and scaups as well.

They first started showing up in the waters of the East Bay January 16 in Oakland, Alameda, San Leandro, Hayward and Fremont. Some birds were also found on the Peninsula.

The goo made it difficult for the birds to stay warm, or regulate their body temperatures. After medically stabilizing the rescued birds, the process involved thoroughly washing the birds with a combination of baking soda and vinegar, followed by Dawn dishwashing detergent, according to International Bird Rescue.

Many of the birds had pressure sores, which can take months to recover from. Others had keel injuries, which tend to heal quickly after surgery.

Back in February, state and federal labs determined that the substance included fats or oils that were not petroleum based. Despite finding it on the birds, however, none of the goo was found in the water or on the beaches, according to International Bird Rescue.

The party responsible for releasing the substance into the Bay has not yet been identified, and the financial burden of caring for the affected birds has largely been absorbed by International Bird Rescue. So far, they say they've spent nearly $150,000.

They're relying on public support to meet the ongoing costs associated with the situation. Interested parties can donate to the cause at www.birdrescue.org/donate.