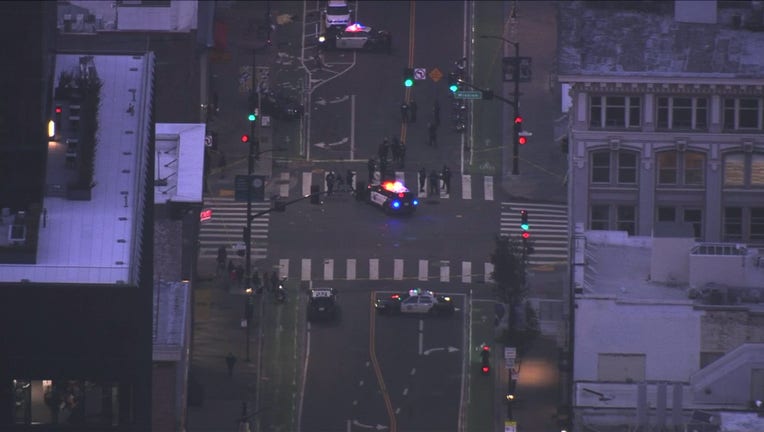 SAN FRANCISCO - Advocates on Sunday issued a call for an increased focus on pedestrians in San Francisco for the new year following the death of two women who were struck by a driver while crossing the street on Thursday.

"We grieve these horrific and heartbreaking losses on our streets," said Jodie Medeiros, executive director of Walk San Francisco. "No words do justice to the loss of these two people and the toll this takes on their loved ones and community."

According to San Francisco police, a gray Honda on Second Street went through a red light at Mission Street and and struck a gray Ford traveling on Mission toward Second, causing the Honda to strike two Elizabeth Platt, 60, and Hanako Abe, 27, who were in the crosswalk.

The driver of the Honda, which had been reported stolen in Daly City on Dec. 29, abandoned the car and fled on foot.

Officers tracked down and arrested 45-year-old Troy McAllister of San Francisco. Police said McAllister, already on parole for robbery, had committed a restaurant burglary in the 200 block of Ritch Street less than an hour before the collision.

A search of the Honda turned up a handgun and extended magazine, as well as suspected methamphetamine, according to police, who said McAllister is suspected of driving under the influence of drugs.

Medeiros noted that "29 people were killed in traffic crashes in 2020, the exact number killed in 2019," even though traffic was substantially reduced during the pandemic.

"Mayor Breed and city leaders at every one of the 13 departments signed onto Vision Zero should be asking themselves what they will do in 2021 to bring down that number," she said. "Traffic safety needs to be a priority. Now. These tragedies will continue unless meaningful action is taken."

The city committed to the 10-year Vision Zero initiative, which aims to eliminate all traffic fatalities citywide, in 2014, and voters approved an accompanying ballot measure that November providing $500 million for pedestrian and bicycle safety measures.

"Vision Zero continues to be the right approach and our best hope for traffic safety," said Medeiros. "Streets can be designed and enforced to keep people safe. But it will take real commitment and real changes from city leaders, as well as much deeper interagency coordination."

She added, "Far too many people have paid the highest price for unsafe streets."