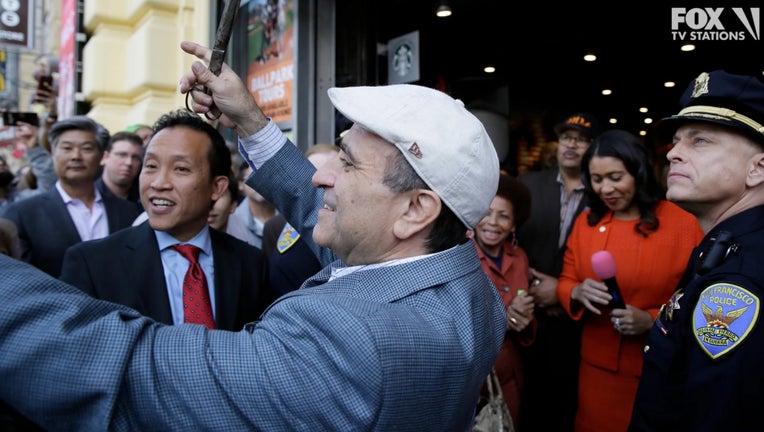 FILE - In this Nov. 20, 2018, file photo, owner Nick Bovis prepares to cut a ribbon during the opening of Lefty O'Doul's Baseball Ballpark Buffet & Café at Fisherman's Wharf in San Francisco. Looking on third from right is then city public works

SAN FRANCISCO - A San Francisco restaurant owner who has agreed to cooperate in an ongoing criminal case against the city's former public works director is due to plead guilty to two counts in federal court Thursday afternoon.

Nick Bovis, 56, of San Mateo, the owner of Lefty O'Doul's restaurant, was initially charged in January along with then-Public Works Director Mohammed Nuru with one count of honest services wire fraud in an alleged scheme to bribe a San Francisco International Airport commissioner in 2018.

The scheme to obtain the commissioner's aid in obtaining a restaurant concession was never completed, according to the Jan. 15 criminal complaint.

Nuru resigned from office in February and the charge against him remains pending while he is free on a $2 million bond.

Last week, Bovis promised in a plea agreement to cooperate with prosecutors and to plead guilty to revised charges of one count of honest services wire fraud plus one count of wire fraud.

He is scheduled to enter the plea before U.S. District Judge William Orrick in San Francisco at 1:30 p.m. Thursday.

But the part of Bovis's plea agreement that describes the conduct underlying the two counts was sealed, and U.S. Attorney's Office spokesman Abraham Simmons said he does not expect it to be disclosed Thursday.

"The facts supporting the Bovis guilty plea have been filed under seal, and I don't expect they will be made public at the plea hearing," Simmons said on Wednesday. In the Jan. 15 criminal complaint, the honest services wire fraud charge lodged against both Nuru and Bovis is defined as using wire communications, including phone calls, text messages and emails, to arrange meetings and discuss the supposed scheme to deprive the public of the honest services of the unnamed airport commissioner.

The two counts to which Bovis plans to plead guilty each carry a maximum possible sentence of 20 years in prison, but the judge is expected to consider federal sentencing guidelines as well as any potential prosecution request for a lesser sentence.

A sentencing date has not been set.