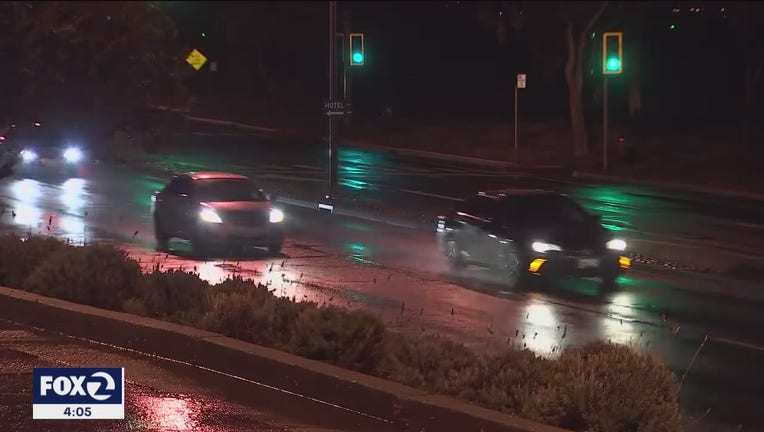 SAN JOSE, Calif. - The middle of the work week is seeing a soaker from start to finish across the Bay Area. It's the first significant rain of the season.

"It’s mid-October. If you’d asked me a month ago I would have told you the earliest we could expect rain is mid-October. Boom! It’s right on-time," said Dr. Allison Bridger, a professor in the San Jose State University’s Department of Meteorology & Climate Science.

For a region and state stuck in the throes of drought conditions, rain is good, but has the potential for bad too.

"If a big rain comes, and the water flows from both sides of the street – come down to the corner, probably be flooding. Wanna be sure nothing blocks the drainage," said East Bay homeowner Nikki Nguyen.

San Jose gets sandbags in place, clears drains in preparation for rainy days ahead

For a region and state stuck in the throes of drought conditions, rain is good, but has the potential for bad too. That's why in San Jose sandbags are in place and drains have been cleared in case of flooding.

The scratching of rakes on leaves and pavements is a seasonal soundtrack, as Nguyen and many other residents spent the days leading up to Wednesday’s rains clearing storm drains of debris.

"Most of the (homeowners) here have done the gardening work that they need to do to keep the basic flooding from happening," said Paul Mueller, another East Bay homeowner who was checking drainage around his property.

Sandbags are now in place, and water pumps on-line, in case rain turn waterways into rivers.

"The biggest reason a catch-basin will clog is because it’s full of leaves. And so when it’s leaf-drop season, we go out and try to remove those leaves proactively to ensure the drains are clear," said Jennifer Seguin, deputy director of the San Jose Department of Transportation.

Experts forecast rain through the end of the week to be moderate. But if the rain rate is higher than expected, it could cause problems, especially in areas damaged by wildfires.

"All the vegetation is burned away. And so there’s no root structure left to hold the soil in place. And so when it rains, all the soil will slide down-hill. And that can be just as damaging as the fire itself in the first place," said Dr. Bridger.

San Jose officials say if you see flooding or road problems due to the rain, call the city’s Dept. of Transportation at (408) 794-1900.