The rain is putting transportation officials and drivers on alert. James Torrez

LARKSPUR, Calif. - The first significant storm of the season, which hit late Tuesday night, is putting transportation authorities and drivers on alert as up to  7 inches of rain are expected to drench parts of the state.

Overnight, more than an inch fell in the North Bay cities of Cazadero and Santa Rosa, andabout half an inch fell in San Rafael and Point Reyes. Rain drenched the East Bay too and caused some damage; a tree fell in Alameda on a car.

Light rain is expected to continue Wednesday, followed by "progressively wetter systems" Thursday and Friday, and then more precipitation over the weekend and into next week, the National Weather Service said.

Residents like Nikki Nguyen of Oakland were preparing for the much-needed wet weather.

"The rain is coming," she said. "And we need to drain the sewer system right on the corner there. So we cleaned up so it doesn't accumulate and clog the sidewalk."

But the rain, which comes after wildfires have collectively burned more than 3,898 square miles this year, won’t be enough to make up for all the water California lost over the summer following some of the driest months on record.

Tuesday, state water officials warned one of the state’s large reservoirs in Mendocino County could run dry by next summer. Meanwhile, new data showed Californians lowered their water usage by just 3.5% in July and August, far from the 15% reduction Gov. Gavin Newsom had requested earlier this year. 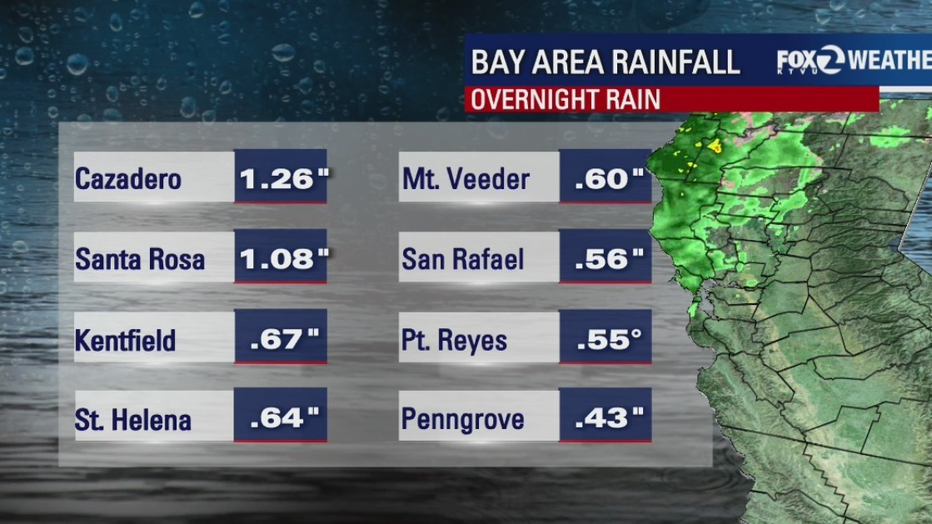 MORE: Reflecting on the Oakland hills firestorm's 30th anniversary and the lessons learned

Newsom responded Tuesday night by expanding the state’s emergency drought declaration to include the entire state, including the major population centers of Los Angeles, San Diego and San Francisco.

"As the western U.S. faces a potential third year of drought, it’s critical that Californians across the state redouble our efforts to save water in every way possible," Newsom said.

Newsom’s order comes as a major storm is predicted to hit California’s Central Valley. California got a taste of what’s coming over the weekend, when smaller storms sprinkled some areas in the valley while dumping 10 inches of snow in higher elevations of the Sierra Nevada mountains.

But the rains coming later this week — as early as Wednesday and continuing into next week — could be the biggest storms the state’s Central Valley region has seen in nine months.

"This is definitely going to be one of those ground-soaking events," said Emily Heller, a meteorologist with the National Weather Service in Sacramento.

Much of the U.S. West is in the midst of a severe drought that has strained water resources throughout the region. California has been hit especially hard, having some of the hottest, driest months on record in the past year.

On Tuesday, state water officials said the rain could be enough to lessen some water restrictions imposed on farmers earlier this year. But it won’t be enough to end the drought.

"One storm is great, but we’re going to need a couple to get us back to a robust and healthy storage condition," Erik Ekdahl, a deputy director for the State Water Resources Control Board, told board members on Tuesday.

California relies on a system of giant reservoirs to store water during the state’s rainy and snowy winter months. Those reservoirs help provide drinking water to about 27 million people in the nation’s most populous state.

But some of California’s most important reservoirs are at or near historic lows heading into the rainy season. If California has another dry winter like last year, state officials on Tuesday warned one reservoir — Lake Mendocino about 120 miles north of San Francisco — could be dry by the summer.

In July, Gov. Gavin Newsom asked people and businesses to voluntarily reduce their water usage by 15% this year. So far, Californians have cut back just 3.5%, according to new data released Tuesday. The most significant reductions in August — 18.1% — came along the state’s sparsely populated north coast, where drought restrictions have been in place for much of the year.

But the south coast, home to more than half of the state’s nearly 40 million residents, cut water usage by just 3.1% in August.

Still, Californians nearly doubled their water conservation in August compared to July, when they reduced consumption by just 1.8%. State Water Resources Control Board chair E. Joaquin Esquivel said that just shows it takes time "for the message to spread." But he said Californians need to "double down" on their conservation efforts.

The Associated Press' Adam Beam contributed to this report.