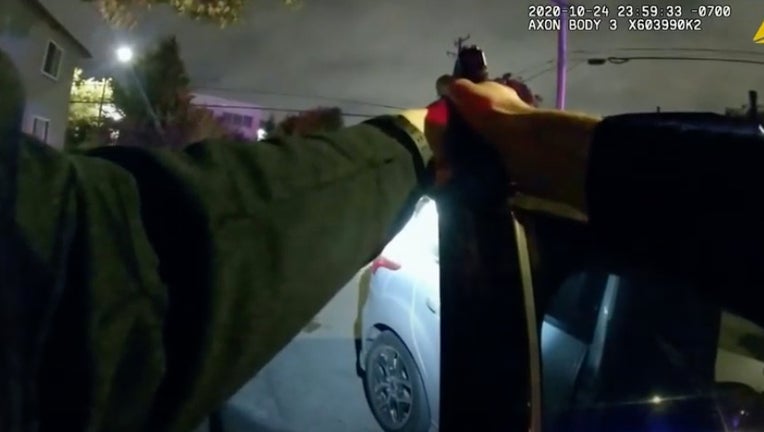 Two officers were in a parked unmarked car about 11:55 p.m. Oct. 24, at 137th and Bancroft avenues, looking for a suspect that eluded them earlier that night. They said they had initially wanted to make a traffic stop but they didn't specify what it was for. That suspect ran away.

Officers stayed in the neighborhood to keep an eye out for that suspect.

Then just before midnight, a man in a silver car driven by John Berry, 43, drove up behind them and stopped with his headlights on, according to police. Police said that this car was unrelated to their first traffic stop and chase. But they did note a gun was in Berry's hand and they said it was pointed at them. The video does not show this.

In a statement in the video, police wrote that Berry said he couldn't drop the gun because his finger was stuck on the release. This part is not shown in the video. But then officers make their way over to Berry. He is lying in the street, his fingers bloody and the gun is stuck to his hand. Police said that they believe one of the officer's shots struck the trigger guard on Berry's gun, causing it to get stuck.

Police gave him immediate medical care, noting he had "three gunshot wounds in the chest" and at least two exit wounds.

Shortly after Berry was struck, dispatchers received a call shortly after the shots were fired from a person who said her fiance might have been shot.

The person said that someone in a vehicle had been following her earlier in the night.

She ran inside and Berry went outside to see if everything was OK.

Police said Berry might have thought the unmarked police car was the one following his fiancee.

Last April, a San Leandro police officer fatally shot Steven Taylor at a Walmart as he was waving a bat. In a rare move by the Alameda County District Attorney, that officer was charged with involuntary manslaughter.