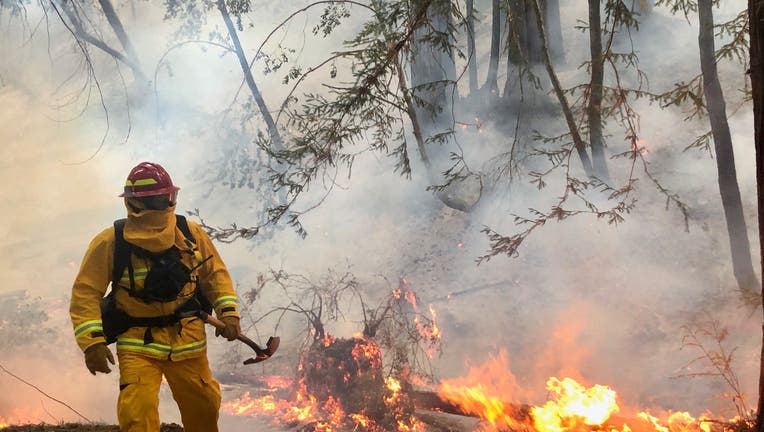 Cal Fire continues to battle numerous wildfires across the state sparked by an Aug.16 lightning storm. Rangers from the Midpeninsula Regional Open Space District (Midpen) and San Mateo County Parks stepped in to assist with the CZU fires, which have burned 85,746 acres in San Mateo and Santa Cruz counties and destroyed over 1,000 structures.

Rangers are digging, cutting and bulldozing overgrowth to reduce the amount of potential fire fuel and hold a fire line at the Old Haul and Wurr roads, located in the county parks north of the fire's perimeter.

"Every road in the forest is vital and critical because it could be a potential fire break, a fire line. Once it gets down to the road it can either jump across or it can stop at those roads," said David Vasquez, supervising ranger for Pescadero Creek, Sam McDonald and Memorial County parks, three of San Mateo County's parks closest to the CZU fires. 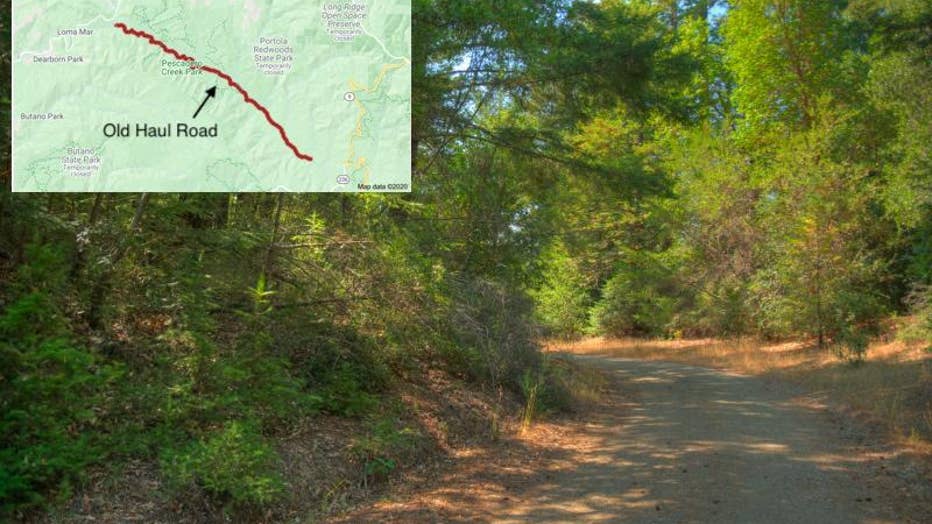 If the fire had jumped Old Haul Road, rangers agreed that there could have been no stopping it from spreading further north into San Mateo County.

"That was a major line to stand on," said Brad Pennington, Midpen's Area Superintendent. "If we wouldn't have stopped it there, the next stopping line was Highway 280."

Pennington, who oversees the Foothills region of Midpen, said their crew of rangers and equipment operators -- all wildfire trained -- have been working on fire suppression at Old Haul Road since Aug. 21.

It's the first time they're undertaking such a large firefighting duty. They work 12- to 13-hour days, spraying the fires from water tenders and breaking up stumps with axes and shovels. 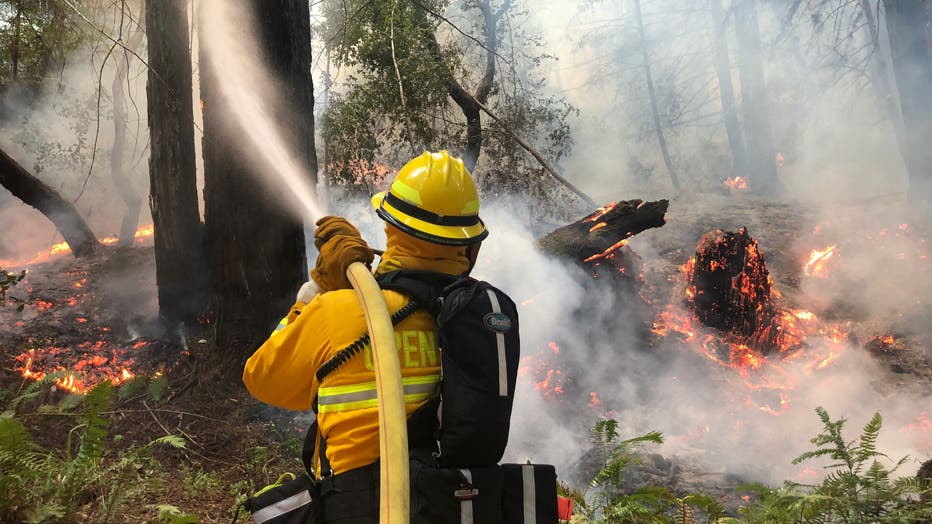 They're also digging up underground logs to prevent the fire from spreading underground and underneath roads via tree roots. Now, they're transitioning to mop-up, a process of clearing smoldering stumps or wood that still hold heat.

"Being on a fire, it's hot, it's smoky, it's sweaty, it's dirty. But at the same time, you get a feeling of accomplishment because you know that what you're doing matters," Pennington said.

Along with Midpen and Cal Fire, San Mateo County's park rangers are also working with to protect fire lines.

Vasquez, the San Mateo County supervising ranger, said he first got a call about the fires on Aug. 16, the day of the lightning storm. 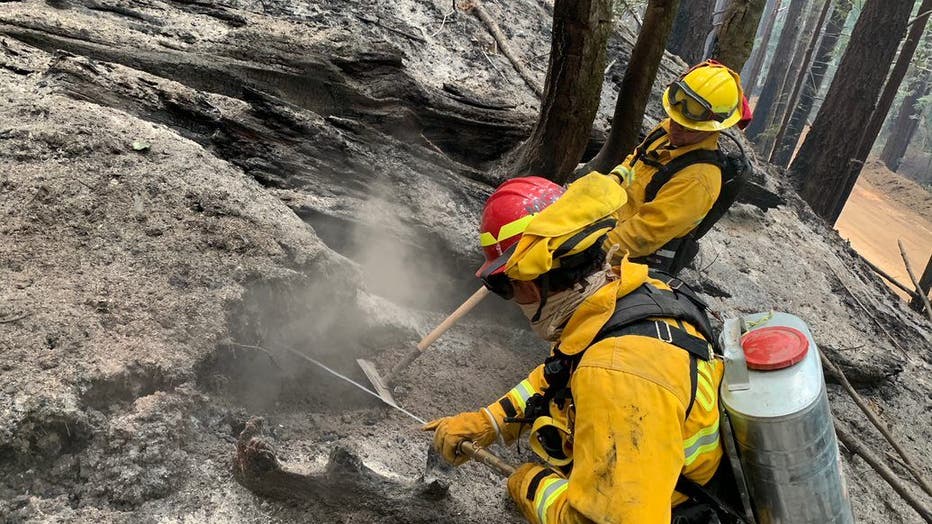 The next day, he went out to a lookout at the Hiker's Hut, a wooden perch along a Sam McDonald County Park trail, north of the fires. He saw white plumes of smoke along the Butano Ridge, coming from the direction of Big Basin Redwoods State Park, which was heavily damaged by the fires.

It was the beginning of an intense week for him and a team of about 20 other rangers and equipment operators. They are not firefighter-trained, so they weren't in the middle of the raging fires, but their training in fuel reduction put them close.

They could see the fire in the distance as they used chainsaws and bulldozers to clear fallen trees and cut overgrowth near Wurr Road, located at the southern border of Memorial Park. Over time, Vasquez saw the fire move closer to their property, but it never entered Memorial Park.

"We would see Cal Fire dropping from the air, either fire retardant or water," Vasquez said. "It was like a battle that was going on and on. Every day we were just trying to protect whatever we could."

San Mateo County's Pescadero Creek Park has been most directly affected by the fires, which burned through approximately 2,800 of the park's 6,000 acres, according to Dan Krug, county arborist at San Mateo County Parks.

Pescadero Creek Park has many multi-use trails that connect it to surrounding parks. They provide a space for hikers, bicyclists and equestrians to journey through its redwoods, but those activities will be on hold for a while.

While 14 of the county's 23 parks have reopened, the parks of the Pescadero Creek Complex (Memorial, Sam McDonald, and Pescadero Creek) remain closed until further notice. Krug urged the public to respect those closures for their own protection, and so staff can work on restoring the area.

While redwoods are resilient and adaptive, and can recover quickly after a fire, the long-term effect of the fires on the park lands and wildlife remains to be seen. Hazards like still-active fires, fallen trees and hot stumps make it hard for park staff to assess damage.

"San Mateo County parks have been in operation for almost 100 years. In that time frame we've never had a fire of this magnitude," Krug said, so there's a lot to figure out when it comes to restoration.

"It's a long-term game at this point," he said.

The impact on wildlife may be varied and complex, according to Leigh Ann Gessner, Midpen's public affairs specialist.

Fortunately, Midpen's lands were minimally affected by the fires, as the few lightning-caused burns on their land were easily contained.

Though California wildlife are adapted to living with fires, the fires can still displace animals, Gessner said, which is where Midpen's lands come into play.

"Our mission is to create this preserved regional green belt of open space," Gessner said. "When those preserved open spaces are connected, those lands provide a space for wildlife to escape to in times like these."

Even though most affected communities in San Mateo and Santa Cruz counties are beginning to repopulate, the fire remains active and smoldering in various hotspots. Crews are making progress -- with the fire 48 percent contained as of Thursday -- but the time until full containment is still to be determined.

Pennington, of Midpen, wants people to know that a fire isn't fully contained until it's cold. A fire can look like it's done burning but stumps and logs can still hold high heat.

"I know that some people might feel that this fire is out but there is some extreme heat still at the center of this fire," Pennington said. With the right conditions -- low humidity and high winds -- that heat could spark a flame and start a fire burning again.

Park staff advised that the public monitor air quality, respect closure signs and be prepared for wildfires. That means maintaining defensible space around property -- that is, space that's free of overgrowth and potential fire fuel. It also means being ready to respond and evacuate if needed.

Both Midpen and San Mateo County parks staff praised Cal Fire for their work and guidance, and were glad for the opportunity to unite in battling the fires.

While some of Midpen's and the county's parks had to evacuate, none were injured or lost property. Still, Vasquez said the wildfires are an experience that they will remember for a while.

"We're very connected to the land so when something happens to the land, it's something that will affect us also," Vasquez said. "We know it so well, we teach it, we navigate it, we take care of it. It's a large event for us. I don't think it's entirely negative. It's just an intense experience."