SAN MATEO, Calif. - A crime spree that started with a purse snatching Saturday evening in San Mateo ended some 14 hours later with the arrest of two men who police said committed multiple robberies and a burglary, stole one car and used stolen credit cards to make fraudulent purchases. 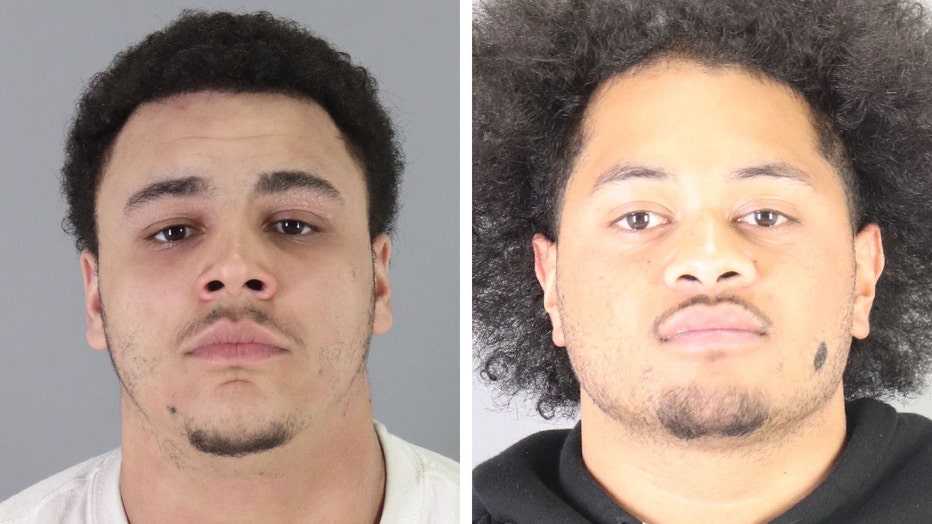 Farries and Tau, both San Mateo residents, were arrested on a series of charges including robbery, conspiracy to commit a crime, possession of stolen property and possession of burglary tools.

The crime spree began at about 7:45 p.m. Saturday, when the suspects were in a vehicle on Laurel Avenue and pulled up next to an elderly female pedestrian and grabber her purse, police said. The vehicle then fled east on Seventh Avenue. The woman was not injured.

Later that same evening, the woman contacted police to report her credit cards had been used in Belmont, San Carlos and in Hayward. Officers obtained security video footage from the businesses where the credit cards were used and were able to obtain descriptions of three people and the suspect vehicle, a gold minivan, according to investigators.

The next morning at 7:20 a.m., police issued an alert for a robbery and car theft by suspects in a vehicle that matched the description of the one driven by the purse snatchers. Then about an hour later, police responded to a report of a vehicle theft on Ridgecrest Terrace. Investigators said the vehicle belonged to the daughter of the woman whose purse was snatched the previous night.

Police later learned  that a spare key to the daughter's Honda was in the stolen purse. Video footage from a private surveillance camera recorded the same gold minivan involved in the car theft.

Within that same hour, police received a report of an auto burglary in San Mateo with the same gold minivan involved, and then about 20 minutes later, another robbery was reported in Millbrae involving the same car.

The gold minivan was spotted by police shortly before 10 a.m. and officers initiated a traffic stop, but the vehicle continued until it pulled into a driveway in the 300 block of North Idaho Street.

Police arrested the two men in the car, which had multiple purses and burglary tools in plain sight, according to investigators. The purse belonging to the first victim of the crime spree was located inside one of two houses occupied by the suspects.

During the search, officers said they also found property likely belonging to additional victims. They also found a handgun with shaved off serial number, and a short-barreled AR-15 gun with an extended magazine.

Both Farries and Tau have been booked into San Mateo County Jail. Police said the identity of the third suspect is still under investigation.