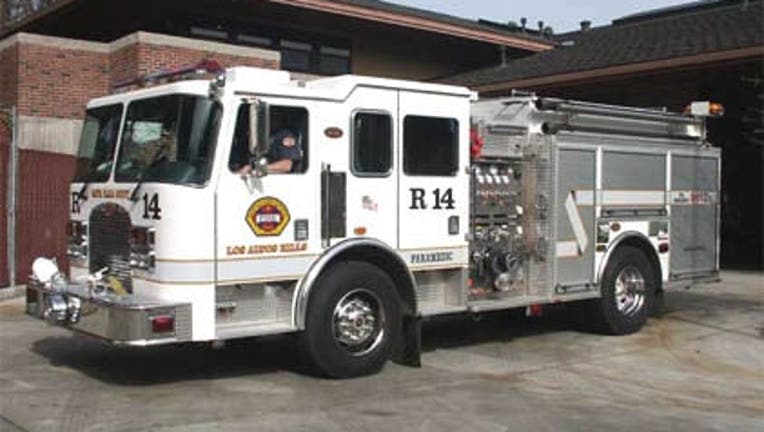 LOS ALTOS HILLS, Calif. - Many Santa Clara County firefighters are calling on the county Board of Supervisors to consolidate the Los Altos Hills County Fire District into the county fire department after a recent audit alleged mismanagement of funds and negligence of high-fire risk areas.

The Santa Clara County Finance and Government Operations Committee reviewed the audit on Thursday morning and, in response, decided to move two resolutions to the county Board of Supervisors meeting for a vote on Oct. 5.

"I do think there are enough irregularities and it has caught my attention," said Board of Supervisors President Cindy Chavez, who sits on the committee. "I, for one, am concerned about how that relationship [with the fire district] allows us or doesn't allow us to be more responsive to fire in general."

The audit, commissioned by the county, revealed that the fire prevention programs set in place by the fire district did not align with the fire risks or with the Santa Clara County Community Wildfire Protection Plan.

Adam Cosner, president of the Santa Clara County Firefighters Local Union 1165, said this was, in part, because the fire district is overseen by a board of non-fire professionals.

"The Santa Clara County Fire Department is a special district that is run by industry professionals ... They understand the dangers of what can happen in the wildland-urban interface, they understand the district and the area, and there's no question that they would be the most appropriate group to have authority over that fire district," Cosner said at a news conference Wednesday.

The fire district had two main programs in place for fuel management/fire protection: the first and largest was a free-of-charge service to remove or prune trees from private property and the second a bush and grass treatment and chipping service.

"These programs are unrelated to the Fire District's legal authority to abate hazardous vegetation," the audit reads. "In particular, the tree removal program ... appears to treat mostly low-risk areas rather than prioritize high fire risks."

The audit revealed that the fire district spent $22 million from 2003-2019 to prune and remove trees on private property with the owner's consent, 94 percent of which were in low-risk areas.

Cosner said the misaligned programs divert money and resources away from wildfire planning, and by extension the county as a whole.

The audit also found that the fire district used funds to support other entities' capital projects.

Among a number of violations, some of the most flagrant were in relations with the California Water Service Company, Los Altos Hills' water utility company.

The fire district spent $6.4 million to construct hydrants and water mains in the last few years and also entered into contracts to pay millions of dollars in infrastructure with the water company.

Financial statements also show that the fire district made "donations" to entities that could potentially constitute as a gift of public funds -- a violation of the California Constitution.

"The water stuff made everyone scratch their head," said Cosner. "What's really difficult about this is we had a great relationship with the fire district ... but when this audit came out and we reviewed it, we thought this isn't right, this is not how this should go."

The audit also found that the fire district violated the state's Brown Act, which guarantees the public's right to attend and participate in meetings of local legislative bodies, on multiple occasions.

Proponents of consolidation argued that by bringing it under the Board of Supervisors' authority, it could reduce the risk of future Brown Act violations.

Consolidation would also allow the tax revenue generated and used by the Los Altos Hills County Fire District to be managed by the county Board of Supervisors and be allocated for fire prevention services throughout the county.

Los Altos Hills Fire District Board of Directors president Mark Warren agreed that there were revisions that should be made -- noting the district has since stopped the free tree cutting service -- but said the fire district could make those changes without consolidation.

"We want to work with the county counsel to ensure policies and processes are in line with county regulations and state regulations and look forward to revising our processes as needed under the guidance of county counsel," Warren said during the Thursday meeting. "That said, we believe that the district can achieve these results without being under the contacting purview of the county director of procurement."

"This is something obviously the Los Altos Hills Fire District opposes," Cosner said of the proposed consolidation. "They have control over their taxes. What they don't want to see is that come to us [the county] and us spend it in South County, but they are way over-budgeted and have more money than they need, and South County does not have enough money."

The consolidation could also provide enough funding to a wildland fire station that has been closed for years and currently is only staffed on red flag warning days instead of its normal four-month period during the high fire danger season.

"As you can tell from the smoke drifting across our faces right now, there is a need to make sure that we staff these stations appropriately," said Brent White, president of the Palo Alto firefighters' union. "The economies of scale are a huge factor in being able to do such a thing. Working with Santa Clara County Fire, I believe we can make sure our LRA [local responsibility area] zones are appropriately staffed [and] there is mutual aid when necessary."

Cosner, who said he speaks for the union, said the consolidation would not change pay of firefighters or the day-to-day operations of the fire district or county fire department, rather that it is "simply the right thing to do."

"The consolidation would change nothing, but everyone gets their minimal staff because you are putting resources in the most critical areas," Cosner said.