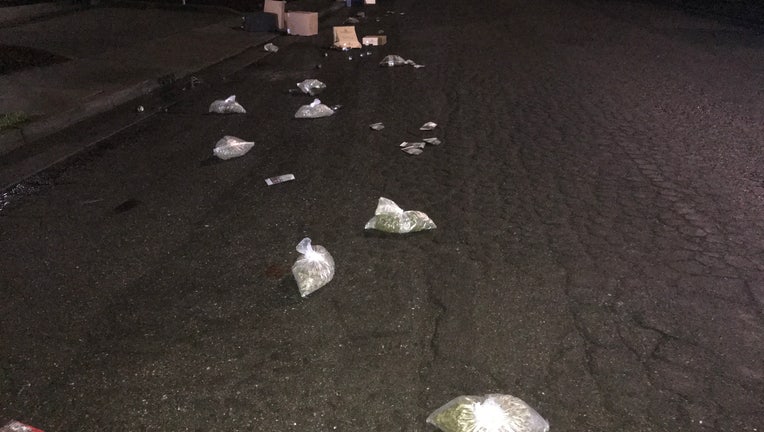 SANTA ROSA, Calif. - Police chased suspects in the burglary of a Santa Rosa marijuana business early Saturday, but called off their pursuit when it was determined to be unsafe.

An alarm at the business in the 900 block of Piner Place notified police at 3:36 a.m. and officers found six men in their 20s loading cars with stolen marijuana, police said in a notice.

The men fled to three waiting vehicles that drove away over the sidewalk, at least one colliding with a police vehicle.

"While driving away, they left a trail of marijuana scattered on city streets," police said.

One of the getaway cars led police on a high-speed pursuit exceeding 100 mph as it reached U.S. Highway 101 southbound near Cotati. The chase was discontinued "because of the suspect's unsafe driving and their wanton disregard for the public's safety," police said.

The fleeing vehicles include newer model Infiniti sedans, one dark-colored and one white.

The loss to the business is still being determined.

Anyone with tips about the case is asked to contact the Santa Rosa Police Deparment Property Crimes Investigation Team at (707) 543-3575.