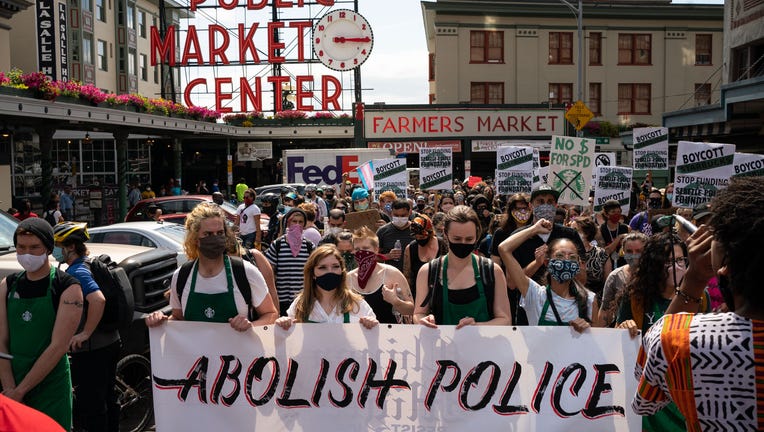 SEATTLE, WA - JULY 16: Protesters carry a banner through Pike Place Market during a march and rally to call for Starbucks to divest from the Seattle Police Foundation on July 16, 2020 in Seattle, Washington. The march began at the original Starbucks

SEATTLE - More federal agents have been dispatched to Seattle to protect federal property amid lingering unrest in the city following the shutdown of a protest zone where demonstrators camped for weeks during George Floyd protests.

The agents are with a special response team of the U.S. Customs and Border Protection agency. Seattle Mayor Jenny Durkan said she felt she was misled by Acting Secretary of Homeland Security Chad Wolf, whom she said told her that the U.S. government had no plans to send federal agents to Seattle.

“I don’t want to say I was lied to, but I think there was maybe semantics that weren’t forthcoming,” Durkan said Friday.

Durkan urged people to protest peacefully over the weekend at planned rallies that are likely to be large. She also said she hoped to avoid what is happening in Portland, which has seen ongoing clashes between demonstrators and federal police.

The agents arrived after businesses in Seattle were vandalized in the downtown area and in the nearby Capitol Hill neighborhood. A small section of Capitol Hill was occupied last month by the protesters and turned into the Capitol Hill Occupied Protest Zone.

Demonstrators took over the several block area for about two weeks until authorities returned in force and cleared out the area on July 1 after two fatal shootings.

King County Executive Dow Constantine tweeted Thursday that a federal plane landed at an airport in Seattle that evening and that “more than a dozen personnel drove off to an unknown destination.”

President Donald Trump's administration has also announced that agents would be sent to Chicago and Albuquerque, New Mexico.

Constantine said people in the Seattle area reject "Trump’s unconstitutional use of federal force. It is a transparent attempt to intimidate. But we will not be intimidated.”

Brian T. Moran, the U.S. attorney for Western Washington, said the federal agents were there solely to protect federal properties, adding that the federal courthouse in downtown Seattle was broken into last weekend and damaged by a smoke bomb and graffiti.

“These are the places where federal judges decide cases and controversies, including those filed by protesters against the city, where Social Security benefits are processed, citizenship is made possible, and where the rights of the accused are protected,” Moran said.

In Portland, the protesters who demonstrate every night have set fires just outside a federal courthouse and torn down a protective fence. Federal agents have repeatedly used tear gas to drive the crowds away from the building and Portland Mayor Ted Wheeler was tear-gassed Wednesday night as he stood in solidarity with the protesters.

Oregon's attorney general is seeking a court order restraining the actions of federal agents in the city during the demonstrations, which have occurred nightly since George Floyd was killed by police in Minneapolis.