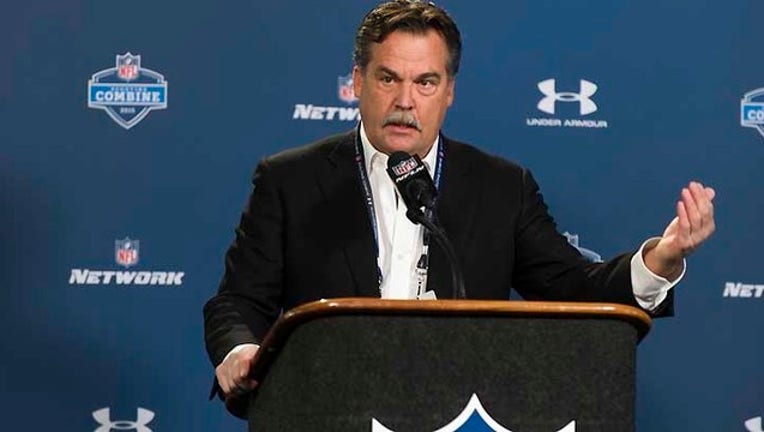 INGLEWOOD, Calif. (AP) — The Inglewood City Council unanimously approved a $2 billion stadium plan backed by St. Louis Rams owner Stan Kroenke that clears a path for the NFL to return to the Los Angeles area for the first time in two decades.

But the approval that really matters — the NFL's blessing for a team to move into the nation's second-largest media market — is a major work in progress. And there's still no certainty Kroenke will move the team from St. Louis, where city officials are working to come up with a suitable stadium deal.

Despite the remaining hurdles, Tuesday's 5-0 council vote prompted Mayor James T. Butts to declare it's "time to celebrate." The hours of public comments that preceded the vote, and the cheers that followed it, showed similar enthusiasm.

"I'm not going to sleep, I'll probably stay up all night just thinking about it," said Henry Yet, 54, of Brea, a member of the Southern California Rams boosters and one of many in attendance wearing the team's blue-and-yellow jerseys. "This is a monumental step."

Only a small handful of dissenters spoke.

Kroenke is part of the Hollywood Park Land Co. development group that is promoting the project just south of Los Angeles. The vote takes an existing redevelopment plan for the site of the former Hollywood Park horse track and adds the 80,000-seat, 60-acre stadium.

It also allowed the city to avoid a more time-consuming approach involving a voter initiative and environmental reviews of issues such as noise, traffic and air pollution.

Yet said he believed Kroenke and the team that left LA two decades ago eventually will return.

"He knows he's going to be in litigation, but he has the money and the firepower to do it, and the city says yes," Yet said.

New urgency for Inglewood materialized last week with the announcement that the Oakland Raiders and the San Diego Chargers are proposing a shared stadium in nearby Carson if they don't get their current hometowns to cough up enough money to replace their aging arenas. Another stadium plan is alive for downtown Los Angeles, but it has no team attached.

Stadium proponents in Inglewood said it is important to approve the concept as soon as possible to avoid delays in the redevelopment that already is underway. They would like construction to start by year's end to have a venue ready for the 2018 football season.

Christopher Meany, executive vice president of the Hollywood Park Land Co., said the plan is important for the community and said at the meeting Tuesday that the project is "really going to be the new heart of Inglewood," which once was home to the Los Angeles Lakers and LA Kings.

Meany has emphasized that the plan does not include any taxpayer dollars to build the stadium, though developers could recoup tens of millions of dollars in costs ranging from installing streetlights and fire hydrants to running shuttle buses and providing officers as security on game days.

Butts, the mayor, said the project was "the best financial arrangement in the history of stadium deals in this country." Supporters also said the stadium would bring the city more than 10,000 jobs and tens of millions of dollars a year in new tax revenue.