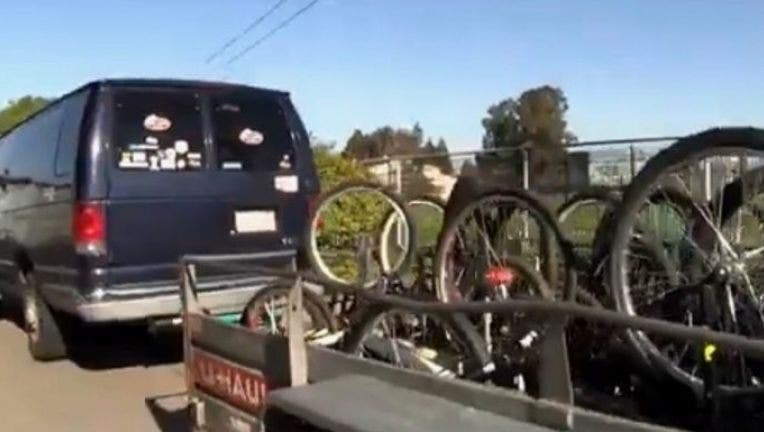 Howard Cato runs the "Flood the Streets with Bikes" program in Oakland.

OAKLAND, Calif. - Last week was bittersweet for an Oakland man who runs a program that teaches East Bay school children how to ride bikes.

The 15-seat passenger van that Howard Cato used to haul bikes to East Bay schools for his “Flood the Streets with Bikes” program was stolen from outside his East Oakland home.

“At first I thought ‘maybe I parked around the corner.’ Finally reality clicked in. (The) van is gone, someone stole it,’’ Cato said following the theft early last week.

Without his van, Cato, 51, had to put the two-year-old  bike program on hold.

But by week’s end, Cato had reason to celebrate.

Oakland police found the stolen blue 2002 Ford Econo E350 van on San Antonio Way, less than two miles from where it was taken.

Cato said the ignition was busted, the lock on the passenger door was broken and the air pumps, pop-up tents and personal items that were in the van were gone.

Still, he said he was happy to have it back, and was planning to make the needed repairs.

Then a call came in from his old buddy Bill Smith, who had seen the story about the stolen van on KTVU and wanted to help.

“I called him and I said, 'Has Apple or Google or Oracle called you to get you a new van?’ He said, ‘Come on you know nobody is going to get me a van.'” "I said, ‘I’m going to talk to my partner and get you a van,’” Smith recalled.

Cato and Smith grew up together in Oakland, shared a love of BMX bikes and riding and have kept in touch for almost 40 years. Smith is the operations manager for Cookies SF, a Bay Area-based cannabis brand and dispensary and clothing line that was founded by Bay Area recording artist and entrepreneur Berner.

Smith said the hunt for the perfect van is now underway so the “Flood the Streets with Bikes” program can continue helping children learn to ride bicycles.

“I feel very strongly about his program,’’ Smith said. “And I wanted to help.”