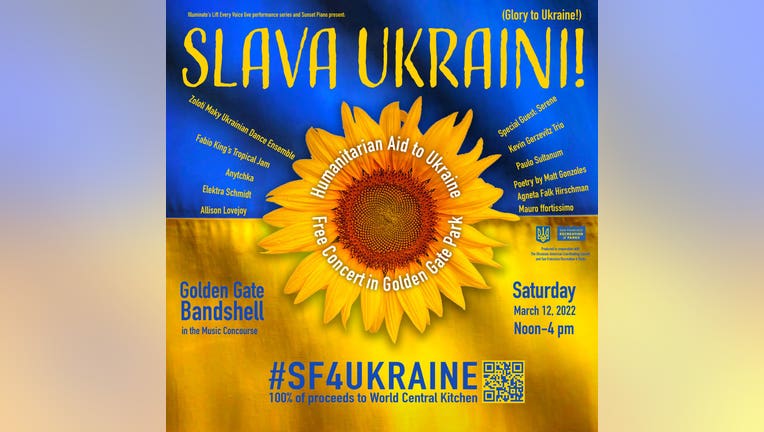 Benefit concert to help in the Ukrainian relief effort was scheduled at the Golden Gate Bandshell on the Music Concourse from noon to 4 p.m. on Saturday, March 12, 2022.

SAN FRANCISCO - Bay Area residents seeking ways to help in the humanitarian aid effort in Ukraine were invited to a free concert in San Francisco’s Golden Gate Park on Saturday, as organizers hoped to use the power of community, music and culture to help those in the crossfires of the Russia-Ukraine crisis.

The event called "Slava Ukraini!" (Glory to Ukraine!) was being organized by a coalition of groups including Sunset Piano, public art group Illuminate, the San Francisco Recreation and Parks Department and the Ukrainian American Coordinating Council.

The effort sought to raise money for World Central Kitchen (WCK), which has been working throughout Ukraine and its neighboring countries to feed residents fleeing for safety since the start of the Russian invasion.

"Slava Ukraini!" promised performances by top musicians with the group Sunset Piano, as well as from Ukrainian singer Anytchka and traditional Ukrainian dancers with the Zoloti Maky Ukrainian Dance Ensemble.

As part of the gathering, sunflowers, the national flower of Ukraine, will be passed out to the first 500 guests to Saturday’s show at the Golden Gate Bandshell on the Music Concourse.

"San Francisco has been profoundly enriched by its Ukrainian community, and we are grateful for this opportunity to contribute to the advancement of peace during this challenging time," said San Francisco Mayor London Breed, adding, "We stand in support of Ukraine’s democracy and the safety of all of its citizens."

Organizers said the event was the first in a series of shows to support the Ukrainian relief effort. This month, they planned almost a dozen shows at the Bandshell to raise money for WCK and Ukrainian relief.

"We are grateful for this opportunity to use the power of music and culture to help bring humanitarian relief in this time of crisis," said Sunset Piano’s Dean Mermell.

The benefit concert will be held on Saturday from noon to 4 p.m. Donations can be made by clicking here.