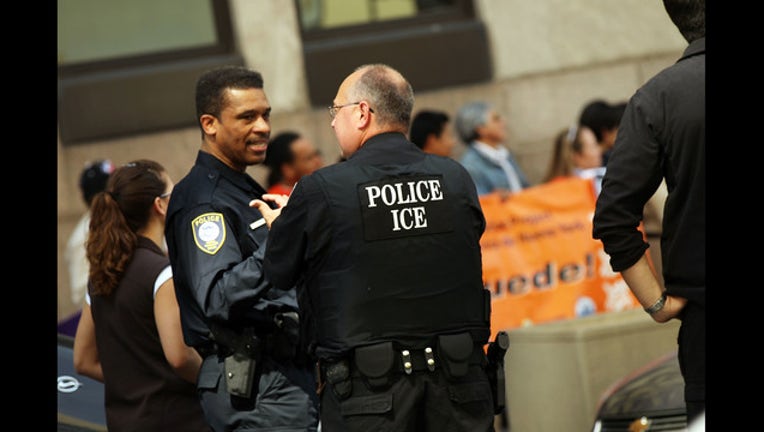 Members of the Immigration and Customs Enforcement (ICE) agency keep watch over demonstrators protesting against a new Arizona law on April 30, 2010 outside of a gov building which houses ICE in New York City. (Photo by Spencer Platt/Getty Images)

Claims from female Immigration and Customs Enforcement detainees of being locked down 23 hours a day were false, the sheriff's office said in a release. Sheriff's officials said the most time any detainee was confined to their room during a routine lockdown was one hour and 24 minutes.

The sheriff's office repeated claims it has made in the past that the detainees have keys to their rooms.

According to the sheriff's office, one detainee who complained of being confined to her room for 23 hours was actually confined for several days in a room with a sink and toilet. This was done for "disciplinary purposes" after she assaulted another detainee, the sheriff's office said.

Regarding the use of biohazard bags for toilet needs, the sheriff's office said there was no evidence that any detainees were forced to use the bags in that manner.

All inmates are free to use the bathrooms "at any time," the media release said, "and even during 'lock down' periods of approximately one hour, by notifying a deputy sheriff by using the call buttons in their rooms."

There were two complaints alleging limited access to health care that the sheriff's office said, "appear to be unfounded." However, Contra Costa Health Services will review these complaints.

The investigation will now proceed to the California Attorney General, the sheriff's office said.