Shots fired at sideshows in Vallejo and Richmond

Police said that shots were fired at sideshows in Vallejo and Richmond over the weekend.

VALLEJO, Calif. - Police said that shots were fired at sideshows in Vallejo and Richmond over the weekend. A spectator was also arrested with their vehicle towed

In Vallejo, a large crowd gathered Saturday night at Lemon street and Sonoma Boulevard and police called in backup, including the California Highway Patrol, the Solano County Sheriff and Benicia police, to help break up the crowd and move them onto Interstate 80. Authorities said a fire hydrant was knocked over.

Vallejo police said in the process of breaking up the sideshow, a white Chrysler 300 cut off an officer while speeding.

Police attempted to stop the Chrysler, but the driver continued to flee, according to officials. A 5-mile chase ended after a spike strip was deployed with the driver running onto it.

Police chased the driver for 5 miles until the fleeing suspect ran over a strip of spikes laid by police.

Authorities said the driver continued to drive until sparks from the vehicle's bare rims caught fire and engulfed the Chrysler. 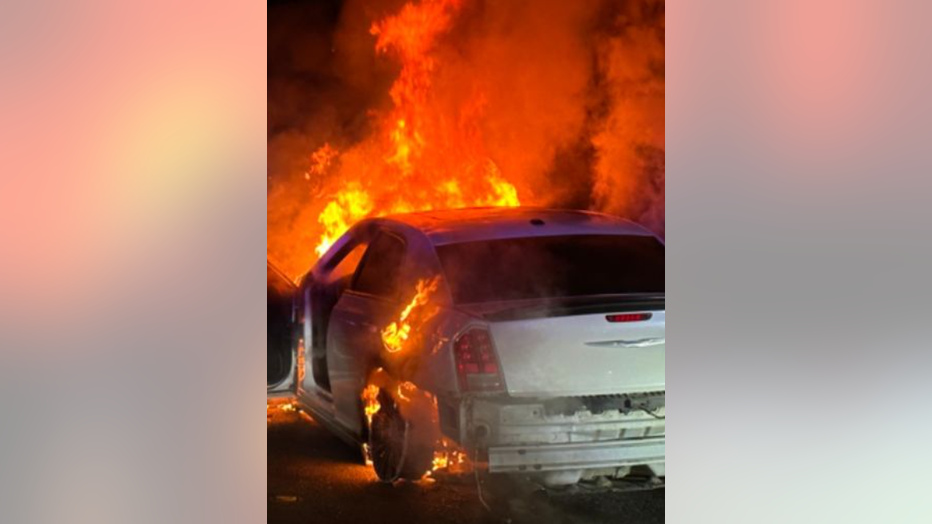 The driver and the passenger attempted to flee on foot before being caught and transported to the Solano County Jail, officials said.

Police revealed the vehicle was registered to the driver's mother and was towed and placed on a 30-day hold.

Several citations were also issued and another vehicle towed.

By early Sunday morning in Richmond, sideshows were reported in four locations: 12th Street and Barrett Avenue, 2nd Street and MacDonald Avenue, Fred Jackson Way and Duboce Avenue and Centra Avenue and I-80.

Police say ShotSpotter technology picked up about 10 gunshots within 30 seconds at one location.