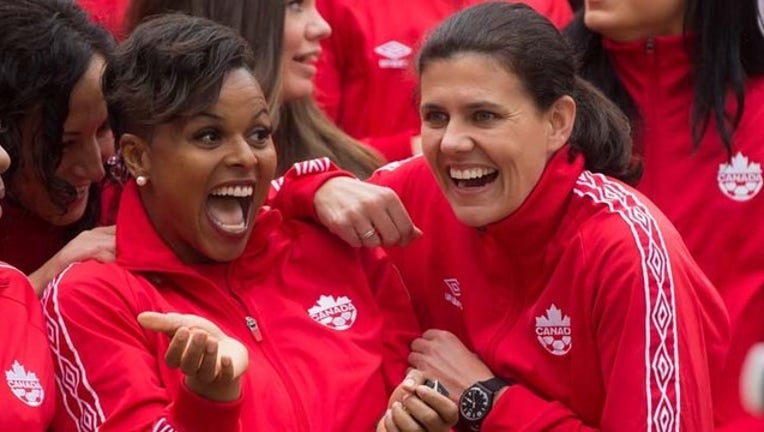 EDMONTON, Alberta (AP) — With the sellout crowd roaring, Christine Sinclair sprinted across the field and into the outstretched arms of coach John Herdman.

Sinclair had just converted a penalty kick in the second minute of second-half stoppage time, giving host Canada a 1-0 win over China on Saturday in the opening match of the Women's World Cup.

After the celebratory hug, Herdman turned to the crowd and leapt into the air, pumping his fist.

Canada's star striker and team captain had made her country proud.

Canada was awarded the penalty by Ukrainian referee Natalia Rachynska after Adriana Leon was fouled by Rong Zhao. The sellout crowd of 53,058 at Commonwealth Stadium, the largest for a national team sporting ever in Canada, was on its feet when Sinclair's shot sailed just inside the post and past goalkeeper Wang Fei.

It was the first match of the month-long tournament played across six Canadian cities. The United States opens Monday against Australia, and the final is set for July 5.

Sinclair's goal erased a frustrating match for Canada, which outshot the visitors 14-5. Following the gala opening ceremony that included performances by Canadians Sarah McLachlan and Tegan and Sara, China had come closest to scoring with a first-half free kick that bounced off both posts.

"I'd be lying if I said I wasn't nervous. Of course, it's the opening game of the World Cup in front of 50-some-odd-thousand fans with the game on the line," Sinclair said. "Yeah, it's nerve-racking, but I live for those moments."

The pressure is on Canada, ranked eighth in the world and making its sixth World Cup appearance. Its best finish was fourth in 2003, and the Canadians were 0-3 at the 2011 tournament in Germany.

Canada has been on the rise in recent years under Herdman and has seen increased support by the government in advance of the World Cup. The team had a surprising bronze-medal finish at the 2012 London Olympics.

"I'm really proud of what we were able to put out there," Herdman said about the latest victory. "Three points. Well done Canada."

Sixteenth-ranked China was returning to an expanded 24-nation World Cup after missing out in 2011, when the field was 16 teams. Known as the Steel Roses, China's best World Cup finish was second in 1999, when the team fell to the United States in the final at the Rose Bowl in Pasadena, California.

Sinclair had her first a chance in the eighth minute, but her strike sailed just wide and past the outstretched arms of China's goalkeeper.

Gu Yasha threatened Canada goalkeeper Erin McLeod, who came far off her line to stop the attack in the 18th minute. China's Wang Lisi's incredible free kick just minutes later bounced between both posts — but never made it in the goal.

Sinclair got a few more good chances late in the match, including a shot off a pass from Sophie Schmidt that was scooped up by Wang Fei.

Sinclair also scored on a penalty kick against China in January at the Four Nations tournament.

"You start thinking about things like that. But then you pick a side and I sort of said to myself, 'It either goes in or not.' Luckily it went in," she said.

It was Sinclair's 154th international goal. She's ranked only behind American Abby Wambach (182) for goals among active players.

"There was no doubt in my mind she was going to put that away," said Schmidt.

China coach Hao Wei was asked afterward about the penalty.

"We are here to play the game. We respect all the rules and we respect the referees," he said through a translator. "But I will have to look at it later to see if it was fair or not."

Group A also includes New Zealand and the Netherlands, who met in the late match on Saturday.

Top-ranked Germany is among the favorite along with the second-ranked Americans and No. 3 France. Japan is the defending World Cup champion after beating the United States on penalty kicks in the 2011 final.