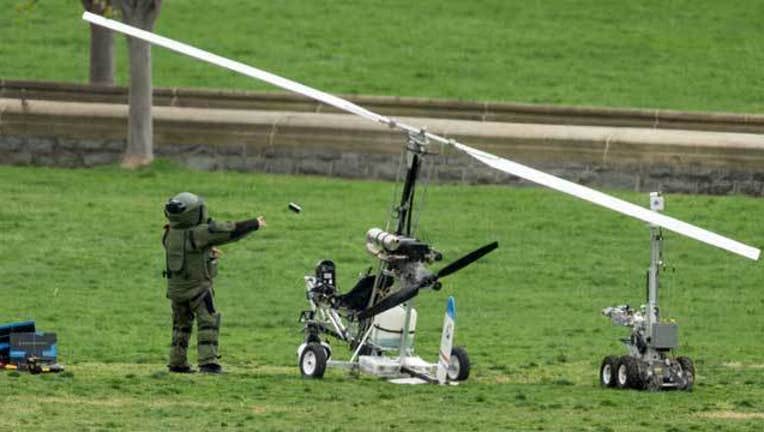 WASHINGTON (AP) — Police arrested a man who steered his tiny aircraft onto the West Lawn of the U.S. Capitol after flying through restricted airspace around the National Mall Wednesday.

One congressional official identified the pilot as Doug Hughes, a Florida Postal Service worker who took responsibility for the stunt on a website where he said he was delivering letters to all 535 members of Congress to draw attention to campaign finance corruption. Public records showed that Hughes is 61 and lives in Ruskin, Florida.

"As I have informed the authorities, I have no violent inclinations or intent," Hughes wrote on his website, thedemocracyclub.org. "An ultralight aircraft poses no major physical threat — it may present a political threat to graft. I hope so. There's no need to worry — I'm just delivering the mail."

The Senate aide said Capitol Police knew of the plan shortly before Hughes took off, and said he had previously been interviewed by the U.S. Secret Service. The aide spoke on condition of anonymity to discuss details of the investigation. Capitol Police declined to confirm the man's identity.

Capitol Police identified the open-air aircraft, which sported the U.S. Postal Service logo and landed about half a city block from the Capitol building, as a "gyrocopter with a single occupant." About two hours after the device had landed, police announced that a bomb squad had cleared it and nothing hazardous had been found. The authorities then moved it off the Capitol lawn to a secure location.

Hughes flew to Washington from the vicinity of Gettysburg, Pennsylvania, which took about an hour, said Ben Montgomery, a reporter with the Tampa Bay Times. Montgomery said Hughes discussed his plan in advance with the newspaper, had meticulously plotted his flight and considered himself on a mission that was "sort of a mix of P.T. Barnum and Paul Revere."

House Homeland Security panel Chairman Michael McCaul, R-Texas, said the pilot landed on his own, but authorities were prepared to shoot him down if he had made it much closer to the Capitol. "Had it gotten any closer to the speaker's balcony they have long guns to take it down, but it didn't. It landed right in front," McCaul said.

The Federal Aviation Administration said the pilot had not been in contact with air traffic controllers and the FAA didn't authorize him to enter restricted airspace.

Airspace security rules that cover the Capitol and the District of Columbia prohibit private aircraft flights without prior coordination and permission. Violators can face civil and criminal penalties.

The White House said President Barack Obama had been briefed on the situation.

Witnesses said the craft approached the Capitol from the west, flying low over the National Mall and the Capitol reflecting pool across the street from the building. It barely cleared a row of trees and a statue of Gen. Ulysses Grant.

John Jewell, 72, a tourist from Statesville, North Carolina, said the craft landed hard and bounced. An officer was already there with a gun drawn. "He didn't get out until police officers told him to get out. He had his hands up" and was quickly led away by the police, Jewell said. "They snatched him pretty fast."

Elizabeth Bevins, a tourist from Atlanta, said she was standing across the street from the Capitol when the little gyrocopter flew in around 20 or 30 feet high, and it "just sort of plopped down on the lawn."

Police with rifles yelled at the pilot not to move and told bystanders to run with their heads down, said Nora Neus, 21, a junior at the University of Virginia who was in town for a job interview. "I thought it was a joke at first. My next thought was this is something really bad," she said.

Amid the initial commotion, the small craft presented a strange sight sitting on the green lawn of the Capitol, its rotors slowly spinning.

The gyrocopter might qualify as what the Federal Aviation Administration calls an "ultralight" aircraft. These aircraft weigh under 254 pounds empty, have a fuel capacity of 5 gallons or less and aren't capable of flying faster than 55 knots. The FAA doesn't certify the safety of these aircraft and their pilots are not required to have a license.