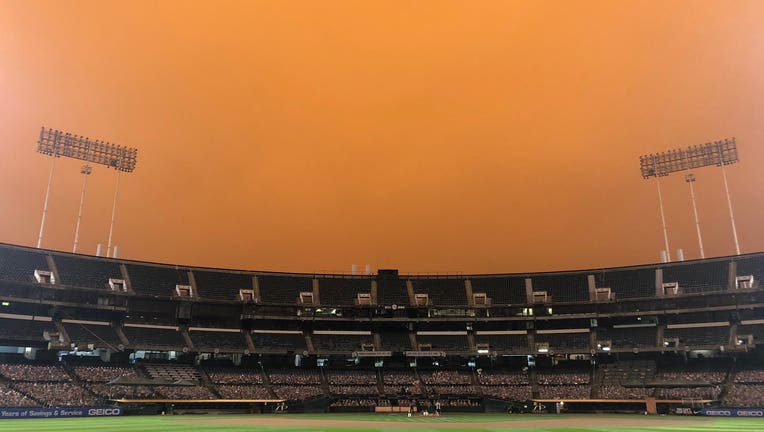 The Oakland Coliseum under an orange sky because of wildfire smoke. Sept. 9, 2020

SAN FRANCISCO - The Oakland Coliseum lights shone brightly for miles through a sunless, smoky sky in the middle of the afternoon — hours before they usually would be on for a night baseball game. By mid-morning across San Francisco Bay, the Giants’ Oracle Park resembled a black-and-orange horror scene.

A number of Northern California wildfires sent a thick, sometimes orange-glowing haze over the area Wednesday that left the Bay Area in an eerie darkness all day. The sun was blocked by the smoke.

“The lights were on when I first got here. It’s like we’re in a dome. It has been dark out there all day. I don’t have any sunglasses to go out there with today,” Athletics manager Bob Melvin said, later adding, “I have a white hat on today, see what color it is when I come in afterward. Little experiment on my behalf today.”

Still, the air quality was below 100 about two hours before first pitch. The A’s played games last month with the air quality index up to 150-160, what is considered the upper end of unhealthy, and games aren’t typically considered for cancellation until it reaches the 200 range, according to Melvin.

It made for a strange baseball scene to say the least. AL West-leading Oakland was set to face the Houston Astros, while across San Francisco Bay the Giants were hosting the Seattle Mariners.

The sky around Oracle Park matched the Giants’ black and orange colors, while the smell of smoke permeated the air leading up to first pitch with chunks of ash falling.

“Certainly a strange look when we all woke up this morning and found kind of the orangeish-red hue to the sky,” Giants manager Gabe Kapler said. “Walking onto the field today was certainly different, in the middle of the afternoon and having the sky look a little bit dark. But my understanding is that the air quality is OK. Of course we’ll keep tabs on it and if anything changes we’ll make the best decisions for the health and well being of our players.”

Astros manager Dusty Baker said there were discussions with the players union about the air quality and safety of playing in such thick smoke.

“We don’t know if it’s going to have impact or not,” said Baker, who still owns homes in Northern California. “I’ve seen it before and I’ve talked to everybody at home and they said they’ve never seen it this bad this long. There are fires all over the West Coast here and I was actually playing Jimi Hendrix today, ‘The Sky is Crying.’ The sky was crying today. I thought I was going to go outside and see Marlon Brando in ‘Apocalypse Now.’ It’s just a strange and eerie feeling.”

Small particles of ash sprinkled down during the Astros-A’s doubleheader Tuesday night and by Wednesday cars were covered in gray dust that required windshield wipers to remove it for visibility.

The NFL’s San Francisco 49ers practiced in similar conditions at their Santa Clara facility in the South Bay on Wednesday.

“I feel like I’m in the Book of Eli, it’s like an apocalyptic state out there, but surprisingly the air quality doesn’t seem as bad as it looks,” coach Kyle Shanahan said.