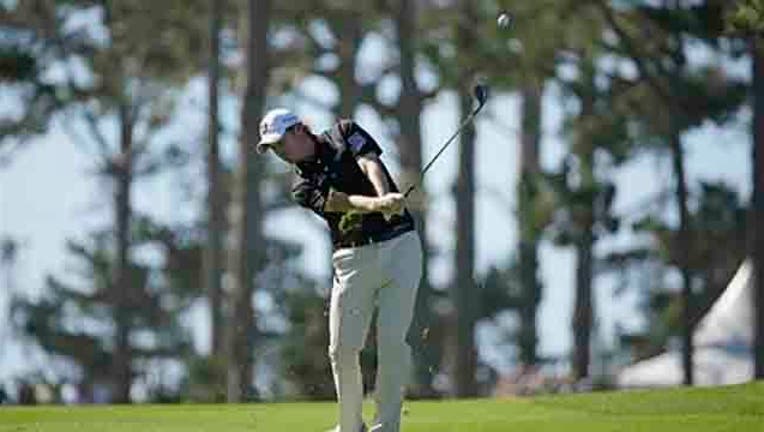 PEBBLE BEACH, Calif. (AP) — Enjoying the best weather Pebble Beach has to offer is one thing. Brandt Snedeker knew he had to take advantage of it with his golf clubs, too.

Snedeker played bogey-free at Spyglass in abundant sunshine and warmth Friday for a 5-under 67 to share the 36-hole lead with Matt Jones in the AT&T Pebble Beach National Pro-Am. Jones had a 66 at Spyglass Hill.

They were at 12-under 131, one shot ahead of Justin Hicks, who had a 68 at Monterey Peninsula.

John Daly, who started the second round one shot behind and briefly was tied for the lead when he birdied his opening hole at Monterey Peninsula, didn't make a birdie over his last 11 holes and shot a 72. He dropped into a tie for 37th and will have to play well Saturday at Spyglass to avoid missing the cut for the 11th straight time at this event.

Scoring has been low, which was to be expected with barely any breeze and enough sunshine to make the ball go farther through a combination of warm air and firmer than usual fairways. The top 60 and ties make the cut, and 60th place was at 4-under par.

Snedeker and Jones now head to Pebble Beach, along with the celebrity rotation.

The pros' outlook was different.

"If the greens firm up, Pebble is going to play the hardest because they're such small greens," Jones said, who won the Shell Houston Open last year for his first PGA Tour title. "If you're not hitting your irons well enough, you're going to struggle out there."

Snedeker, who won at Pebble Beach two years ago, always felt that was the key to getting into contention and to winning.

"The years I'm playing good, it seems like it comes down to how you play Pebble for me the last two days," he said. "When the weather is good, you need to be able to get after it and shoot a low round. And the way the scores are right now and the weather forecast over the weekend, it's going to take ... somewhere around 20-under par to win this golf tournament. So I've got to look at 7- to 10-under par the next couple days to win. Can't take the foot off the gas pedal."

FedEx Cup champion Billy Horschel, who hasn't finished in the top 20 this season, had a 65 at Spyglass Hill and was part of a large group two shots behind. The biggest move of the day belonged to Torrey Pines winner Jason Day, who wasn't ever sure he would play.

Day said he took his son to the emergency room with a stomach ailment, which then was passed to his wife and then to him. The Australian wasn't sure he could play 30 minutes before his tee time, and then he posted a 62 at Monterey Peninsula.

That put him only three shots out of the lead, along with Jim Furyk (70) and Nick Watney (69), who both played at Spyglass.

No one needs to get it in gear like Snedeker.

When he won at Pebble Beach two years ago, he moved to a career-high No. 4 in the world, the highest-ranked American behind Tiger Woods. He now is one spot behind Woods in the world ranking, except that's not a good thing. Snedeker is No. 63 and can't count on the tournaments he regularly plays, particularly the Masters.

He had only four top 10s all of last year and fell out of the top 50. After missing the cut in his 2015 debut at the Humana Challenge, Snedeker has taken baby steps in Phoenix and San Diego and appears to be hitting his stride.

"It's no fun not being eligible for the Masters and not playing World Golf Championships and stuff like that," Snedeker said. "So it's a huge motivating factor, not that I need any more to be motivated for, but I definitely want to make sure that I qualify for the Masters and Match Play and WGCs and all that kind of stuff. And to do that, I need to play good. So it's nobody to blame but myself. I need to get out there and get it done."

It helps when his putter is cooperating, always the best part of his game. That's what he has been working on the most, believing that everything revolves around his short game. Now he feels like he is putting the way he should, and he put his old putter back in the bag in November after replacing it toward the second half of the season.

"Sometimes you got to use some harsh words with the putter if it's not paying attention and bench them, leave them in a hot trunk for a while and let them know that they can be replaced," he said with a smile. "And luckily, she understood and got back into working form."