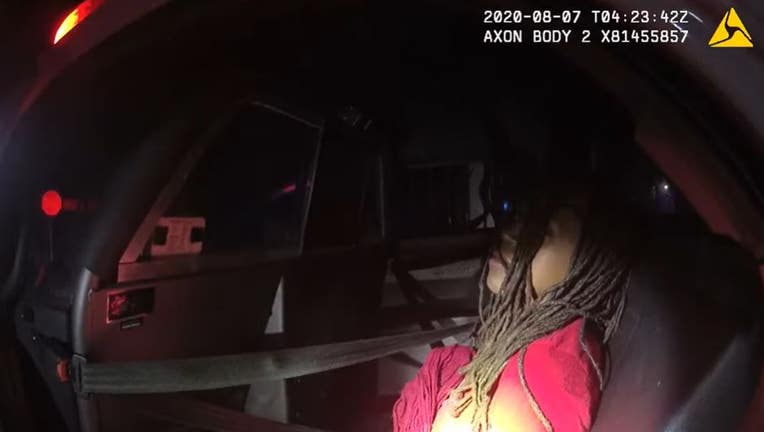 SOLANO COUNTY, Calif. - Solano County Sheriff's Department on Monday released deputy-worn, body-camera footage and dash-camera video from an incident that has led to a federal lawsuit.

The sheriff's office said they released the full videos of the August 6, 2020 traffic stop from the town of Dixon in order to be transparent. The videos are available on the sheriff's department website.

The sheriff's office said last week the driver's attorney released edited versions of these videos that left the community with questions about what happened. A 10-minute version of the video depicting driver Nakia Porter's ordeal went viral last week. The un-edited version of the body-camera footage is more than 18 minutes long.

Porter, a 33-year-old software engineer, was pulled over by deputies for mismatched license plates. She and her father, Joe Powell, who was the passenger, exited the SUV and said they were switching drivers. Three young children were in the vehicle during this incident as the family was headed back home to the Sacramento area from Oakland.

The situation quickly devolves when the deputies try to detain Porter for what they said was her being non-compliant. The sheriff's department did not comment when the story and edited video first came to light, but are now saying Porter slipped out of handcuffs and struck a deputy in the face.

The body-cam footage is very shaky and is difficult to clearly see what is happening. But the struggle between Porter and the two deputies is apparent. The dash-cam video does not show the climax of the struggle.

Porter, who is Black, is clearly heard saying she is not resisting arrest at which point a female deputy retorts, "You're being detained."

A male deputy commands Porter to, "Put your hands behind your back now! Get on your stomach!"

The deputy threatens to Tase Porter, who is by then on the ground, during the struggle. Shortly after, when the deputies have gained control, the male deputy says, "I believe she’s unconscious. She’s out," referring to Porter.

Later, the video shows arriving medics. The male deputy tells one of the medics he thinks Porter became unconscious during the struggle when she was struck in the face. The deputy said he was "full mount on her" and that may have been around the time she went unconscious.

The federal lawsuit, filed last week in a U.S. District Court in Sacramento, says the arresting deputies, Dalton McCampbell and Lisa McDowell, lied about the encounter to arriving paramedics and on official reports. The lawsuit seeks a jury trial for the deputies and for unspecified damages.

"They used their power and their control to force their way into my life and terrify me and an entire family," Porter said at a news conference last week.

Porter is about 5'2" and 125 pounds. Last week, her attorney, Yasin Almadani, had accused the deputies of "unlawful seizure, assault and excessive force" further calling the incident a "racially motivated beating and terrorizing of a Black family."

"These officers came in with guns drawn, without cause and took her into custody and beat her up without cause in front of her family," Almadani said in an interview with KTVU.

Others criticized the deputies use of force and wondered why de-escalation techniques were not used.

The full version of the video also shows Deputy McCampbell checking on Porter at least twice in the backseat where she was detained. The first time he shines his flashlight on her and concludes that, "she's fine," telling the other deputy that Porter is conscious.

The second time he checks on her, it shows the interaction where Porter tells him her name and age and where to find her identification. He tells her that an ambulance in on the way to check on her injuries.

Porter was jailed overnight but never charged. The lawsuit also names a superior officer who signed off on the incident reports.