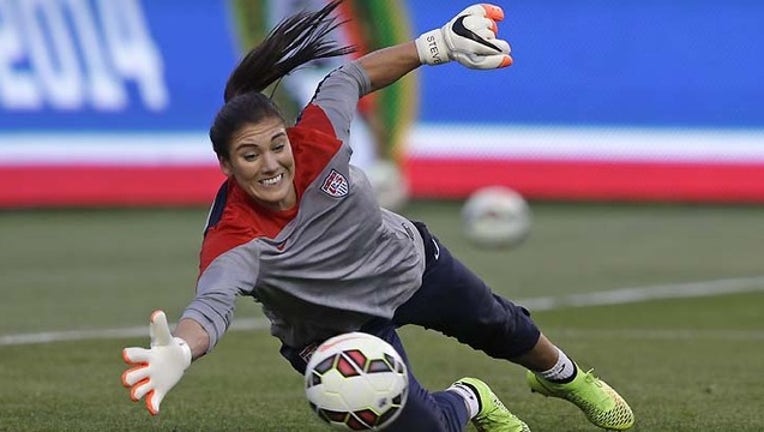 WINNIPEG, Manitoba (AP) — Once one of the prominent faces of the U.S. women's team, promoted alongside stars like Alex Morgan and Abby Wambach, Hope Solo is now largely relegated to the background while she faces continued scrutiny over a domestic assault case last year.

She poses a difficult problem for U.S. Soccer as the women seek an unprecedented third World Cup title: How to laud Solo's performances on the field while not fueling the attention on her behavior off it. And the dilemma will likely become amplified the further the U.S. advances in soccer's premier tournament.

Former U.S. coach Pia Sundhage, now the head coach of Sweden, summed the dichotomy best earlier this week when she called Solo "a piece of work," while in the same breath praising her at the "best goalkeeper in the world."

Solo is quietly on the job in Canada. It's a contrast to the World Cup in Germany four years ago, where she was everywhere, held up as one of the team's biggest stars. And deservedly so: She would win the Golden Glove award as goalkeeper of the tournament. The performance landed her on the cover of Sports Illustrated. Her star would rise higher with an appearance on "Dancing with the Stars."

Last June she was charged with two misdemeanor counts of fourth-degree domestic violence assault stemming from an altercation with her sister and 17-year-old nephew at a family gathering in Kirkland, Washington. A judge dismissed the charges earlier this year.

U.S. Soccer has been criticized for its handling of the situation, with some calling for Solo to be benched while the case played out.

Solo was suspended from the team for 30 days earlier this year after her husband, former Seattle Seahawks tight end Jerramy Stevens, was arrested in Southern California for driving under the influence in a U.S. Soccer team van. Solo was his lone passenger.

Following the suspension, Solo wrote on her blog that she had taken the time to work on herself and issues that were vexing her. But an ESPN investigative report released on the eve of the U.S. team's World Cup opener against Australia raised new questions about the assault and reignited the controversy.

U.S coach Jill Ellis maintains the issue not a distraction in Canada: "I know our team and we have each other's backs. I think it was something a long time ago and we've put it to bed."

Solo made three spectacular saves in the 3-1 victory over the Matildas. She spoke briefly afterward about her performance, but was short when a reporter asked her about her focus in the face of what had transpired off the field.

After the team's 0-0 draw against Sweden, Solo walked past reporters smiling but did not speak. It was her 85th career shutout, an ongoing U.S. team record. It was also the first World Cup shutout for the U.S. since July 2, 2011, when the team defeated Colombia 3-0 in group play.

Solo has six World Cup shutouts behind Brianna Scurry's 10. Her next start will tie her with Scurry for the most international appearances for a U.S. goalkeeper at 173. That will likely come Tuesday, when the United States plays Nigeria in Vancouver, British Columbia, in the final match of the group stage.

Anyone tasked with promoting Solo would be best served to keep the attention squarely on the field, said Bob Dorfman, a sports marketing specialist for Baker Street Advertising in San Francisco. Nike is Solo's most prominent sponsor.

"It's going to get interesting if she's just fantastic in goal, as kind of the difference maker, where it's hard to ignore her," Dorfman said.

Solo herself has been carrying on as the tumult swirls around her. While in Winnipeg for the first two matches of the group stage. Solo met with a 13-year-old Canadian girl, herself a goalkeeper on a youth team.

A teacher at Julianna Raposo's school contacted a representative for Solo months ago, inquiring about a possible meeting during the World Cup. Given what Solo has been facing off the field, there wasn't much optimism the request would be granted.

But Solo invited the girl to the team hotel last week and gave her tickets for the match against Sweden Friday night. Raposo turned the meeting into a school project at Henry G. Izatt Middle School.

Solo talked to Raposo about the criticism she's facing.

"She said that of course, she's a person and it does hurt her, but she's got to brush it off," Raposo said before the Sweden match. "That's kind of what I look up to. You can't let other people you don't know bother you. She was like, 'You've got to push your way through it.'"

Asked if Solo's off-field behavior had any impact on her opinion of her, Raposo emphatically shook her head no.

Most of the fans who attend the U.S. team's first two matches Winnipeg were also decidedly pro-Solo, with an obvious bias.

"Honestly, I kind of feel sorry for her. It kinda feels like piling on at this point," said U.S. fan Maggie Pressley about the renewed attention put on Solo's off-field trouble. "I'm going to root for the U.S. no matter who is in goal, but she is really great. I think she gives us the best chance to go far, if not all the way to the championship here."