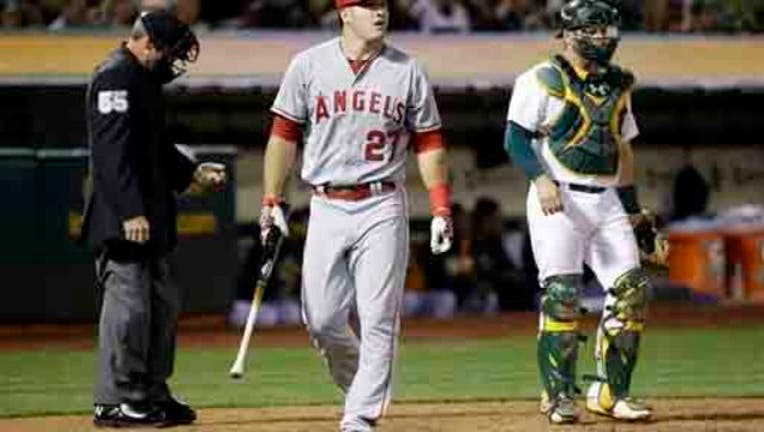 OAKLAND, Calif. (AP) — Sonny Gray struck out six and walked one over eight impressive innings, Brett Lawrie hit a three-run homer in the first that held up, and the Oakland Athletics snapped a season-high four-game losing streak with a 6-2 victory over the Los Angeles Angels on Tuesday night.

Josh Reddick hit a solo homer and a two-run single to back Gray (3-0), who retired 13 straight batters during one stretch to help the A's avoid dropping to five games below .500 for the first time since June 30, 2012. Oakland bounced back against the defending AL West champions after being swept at home over the weekend by Houston.

Gray allowed two runs and six hits in his 105-pitch day. He lowered his ERA to 1.98 before Evan Scribner struck out the side in order to finish the 2-hour, 6-minute game.

David Freese hit a two-run single on his 32nd birthday in the first inning but the A's answered immediately in the bottom half. The Angels were limited to three or fewer runs for the seventh time in 10 games after they led the majors in runs with 773 in 2014.

Gray improved to 4-1 over seven starts and eight career appearances against the Angels, who played their first game since the trade of left fielder Josh Hamilton to Texas became final during Monday's day off.

Jered Weaver (0-3) remained winless in five starts to begin the season — the first time in his career he has started 0-3. Facing Oakland for his second straight outing, the right-hander allowed six runs and six hits in seven innings, struck out one and didn't walk a batter for the fourth time this season.

The Angels opened a six-game Bay Area road trip that includes a weekend interleague series against the World Series champion San Francisco Giants at AT&T Park. Los Angeles is in a stretch with 25 straight games in its home state.

Los Angeles starting pitchers had gone 3-0 with a 1.50 ERA with 30 strikeouts over the previous six games.

Angels: C Chris Iannetta was held out as a precaution with a cut on a finger of his throwing hand but was expected to play Wednesday night.

Athletics: CF Coco Crisp, recovering from surgery on his right elbow, hit soft toss in the cage and could take regular batting practice Friday before heading out on a rehab assignment with Class-A Stockton this weekend. ... INF/OF Ben Zobrist underwent successful arthroscopic surgery on his left knee, performed by Dr. Jon Dickinson in San Francisco. ... RHP Jesse Hahn, whose turn in the rotation was skipped as he healed a blister on the tip of the middle finger on his throwing hand, is ready to go Wednesday night. ... RHP A.J. Griffin (reconstructive elbow surgery last year) visited from Arizona to throw in front of the major league staff. He is using all his pitches except for his cut fastball.

Angels: Matt Shoemaker (2-1) is expected to return from the bereavement list and make his fourth start of the year.

Athletics: Hahn (1-1) pitches for the first time since combining on a seven-hit shutout in a 5-0 win at Kansas City on April 18.