Southwest Airlines CEO Bob Jordan apologizes to customers and crew in a video statement. Jordan says plans for next few days "is to fly a reduced schedule," adds company "optimistic" it will be back on track before next week

DALLAS - Travelers who counted on Southwest Airlines to get them home suffered another wave of canceled flights Wednesday, and pressure grew on the federal government to help customers get reimbursed for unexpected expenses they incurred because of the airline’s meltdown.

Exhausted Southwest travelers tried finding seats on other airlines or renting cars to get to their destination, but many remained stranded. The airline’s CEO said it could be next week before the flight schedule returns to normal.

Adontis Barber, a 34-year-old jazz pianist from Kansas City, Missouri, had camped out in the city’s airport since his Southwest flight was canceled Saturday and wondered if he would ever get to a New Year's gig in Washington, D.C.

By early afternoon on the East Coast, about 90% of all canceled flights Wednesday in the U.S. were on Southwest, according to the FlightAware tracking service.

RELATED: Flight canceled? Can you get a refund? Here's how to find out if you're owed money

Other airlines recovered from ferocious winter storms that hit large swaths of the country over the weekend, but not Southwest, which scrubbed 2,500 flights Wednesday and 2,300 more on Thursday. 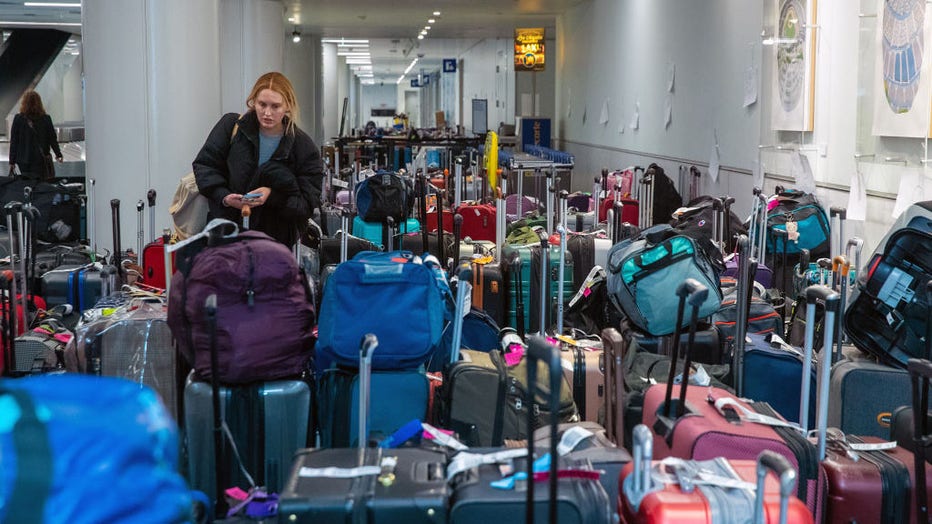 The Dallas airline was undone by a combination of factors including an antiquated crew-scheduling system and a network design that allows cancellations in one region to cascade throughout the country rapidly. Those weaknesses are not new — they helped cause a similar failure by Southwest in October 2021.

The federal government is now investigating what happened at Southwest, which carries more passengers within the United States than any other airline.

In a video that Southwest posted late Tuesday, CEO Robert Jordan said Southwest would operate a reduced schedule for several days but hoped to be "back on track before next week."

Jordan blamed the winter storm for snarling the airline’s "highly complex" network. He said Southwest’s tools for recovering from disruptions work "99% of the time, but clearly we need to double down" on upgrading systems to avoid a repeat of this week.

"We have some real work to do in making this right," said Jordan, a 34-year Southwest veteran who became CEO in February. "For now, I want you to know that we are committed to that."

Capt. Casey Murray, president of the Southwest Airlines Pilots Association, tells LiveNOW there were warning signs leading up to this national travel nightmare.

Transportation Secretary Pete Buttigieg, who has criticized airlines for previous disruptions, said that "meltdown" was the only word he could think of to describe this week’s events at Southwest. He noted that while cancellations across the rest of the industry declined to about 4% of scheduled flights, they remained above 60% at Southwest.

From the high rate of cancellations to customers’ inability to reach Southwest on the phone, the airline’s performance has been unacceptable, Buttigieg said. He vowed to hold the airline accountable and push it to reimburse travelers.

"They need to make sure that those stranded passengers get to where they need to go and that they are provided adequate compensation," including for missed flights, hotels and meals, he said Wednesday on ABC’s "Good Morning America."

On its website, Southwest told customers affected by canceled or delayed flights between Dec. 24 and Jan. 2 to submit receipts. The airline said, "We will honor reasonable requests for reimbursement for meals, hotel, and alternate transportation."

Navy physician Lt. Cmdr. Manoj Mathew said after spending hours on hold over two days Southwest reimbursed him for the first leg of his family's trip from Washington to Houston — they drove through terrible weather after the Dec. 23 flight was canceled. Now he is worried whether Southwest will operate the return flight Sunday.

"I’m trying to reach other airlines," he said. "There are no flights, plus it’s very expensive for us."

Leaders of Southwest’s labor unions have warned for years that the airline’s crew-scheduling system, which dates to the 1990s, was inadequate, and the CEO acknowledged this week that the technology needs to be upgraded.

The other large U.S. airlines use "hub and spoke" networks in which flights radiate out from a few major or hub airports. That helps limit the reach of disruptions caused by bad weather in part of the country.

Southwest, however, has a "point to point" network in which planes crisscross the country during the day. This can increase the utilization and efficiency of each plane, but problems in one place can ripple across the country and leave crews trapped out of position.

Those issues don't explain all the complaints that stranded travelers made about Southwest, including no ability to reach the airline on the phone and a lack of help with hotels and meals.

Teal Williams, a 48-year-old active-duty Army reservist from Utah, was stuck at the Denver airport with her husband and two teenage kids on Christmas Day after their flight to Des Moines, Iowa, was canceled. She said Southwest employees had no information about flights and didn’t offer food vouchers while elderly passengers sat in wheelchairs for hours and mothers ran out of formula for their infants.

"It was just imploding, and no one could tell you anything," Williams said. The airline employees "were desperately trying to help, but you could tell they were just as clueless as everybody else ... it was scary."

Unable to find plane, train or bus seats, Williams and her family felt lucky to score a rental car. They drove 12 hours to Iowa.

Barber, the musician from Kansas City, already missed a performance Sunday in Dallas but had hoped to make it to Washington in time for a New Year’s performance near the National Mall.

"I’m missing out on money," he lamented.