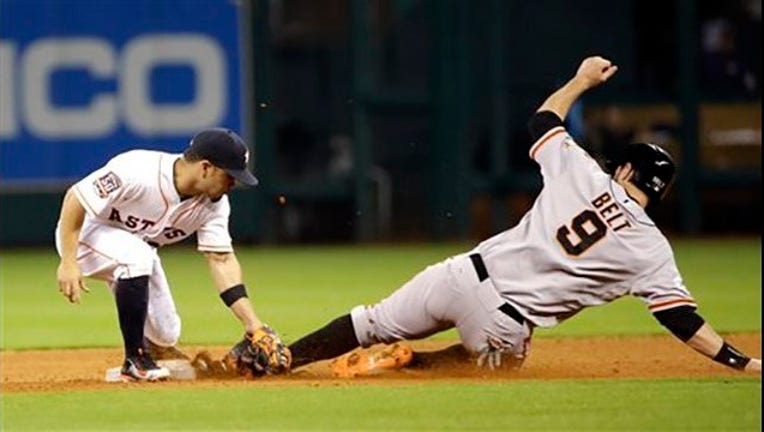 HOUSTON (AP) — George Springer hit a tie-breaking solo homer in the eighth and the Houston Astros rallied past the San Francisco Giants 4-3 on Wednesday night.

Springer had come off the seven-day concussion disabled list prior to the game. He sent Jeremy Affeldt's (0-2) pitch over the yellow line in left-center. It was his lone hit and broke a 0 for 10 slump.

Chad Qualls (1-2) threw a perfect eighth for the win and Luke Gregerson pitched the ninth for his eighth save.

Buster Posey had three hits and three RBIs, putting the Giants ahead 3-1 in the fifth with a two-run homer after he gave San Francisco a 1-0 lead in the first on a single.

Posey had a chance to tie it in the ninth with runners on the corners and two outs, but he grounded back to the pitcher to end it.

Jason Castro hit a solo homer for the second straight game, and Luis Valbuena tied it at three in the sixth with a solo homer.

Colby Rasmus tied it at one in the fourth with an RBI single.

Brett Oberholtzer lasted three innings in his first start of the year, allowing one run on five hits with three strikeouts. The lefty departed due to a blister on his pitching hand. Prior to the game, Oberholtzer came off the disabled list where he had been because of a left index finger blister suffered at the end of spring training.

Giants: Matt Cain threw a 20-pitch bullpen session. The light throwing session was the first time Cain has thrown off a mound since straining his flexor tendon April 4. Manager Bruce Bochy said it is the first of "three or four" bullpen sessions he will throw. . OF Hunter Pence continued his rehab assignment Wednesday. Pence has two hits in four games as he comes back from a fractured left forearm. Bochy said he is looking to get the outfielder more at-bats and will be evaluating him on a daily basis.

Giants: RHP Tim Lincecum (3-2) will try to continue his solid start Thursday against Cincinnati. Lincecum owns a 2.00 ERA this season, but has struggled against the Reds in his career, going 0-4 with a 9.79 ERA in six career starts.

Astros: RHP Roberto Hernandez (1-3) will start Thursday against Toronto as the Astros start a four-game series against the Blue Jays. Hernandez threw 7 2-3 innings, allowing two runs on six hits in his last start against the Angels Friday in a 2-0 loss.