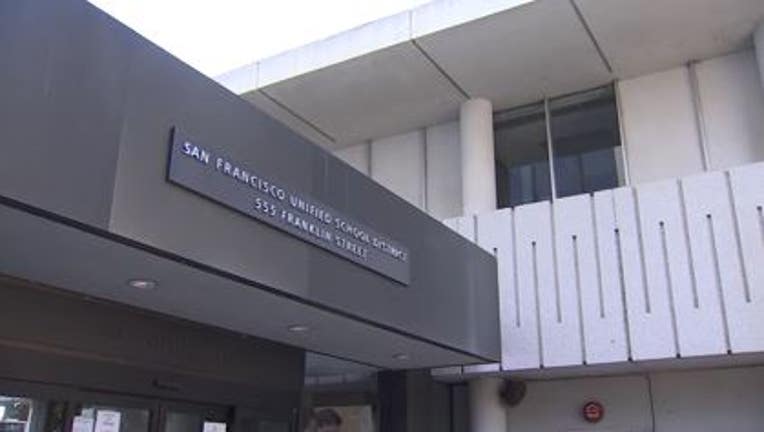 SAN FRANCISCO - San Francisco Unified School District on Tuesday announced the return to full-time, in-person learning for all of the district's students will be August 16. This came after a stinging rebuke from California Department of Education, which will be withholding funds from the district for not complying with state law.

Superintendent Dr. Vincent Matthews said the next school year includes a full day of school, the return of after school activities, sports, clubs and everything the district, its students and staff have been missing out on when the pandemic triggered distanced, remote learning as the norm in March of 2020.

San Francisco Unified School District on Tuesday announced the return to full-time, in-person learning for all of the district's students will be August 16. This came after a stinging rebuke from California Department of Education, which will be withholding funds from the district for not complying with state law.

"We will continue to prioritize the health and safety of all of our students and staff, and as new public health guidance becomes available, we will be ready to adjust as needed," Matthews said. He highlighted an important way to support the community is to get vaccinated.

Children 12 and older are currently eligible for the Pfizer vaccine and there's a new study that shows the Moderna vaccine appears to protect the same age group from COVID-19, though it has not been officially approved.

There will also be some district-wide scheduling changes.

"Beginning next fall, every school in the district will start at one of three times: 7:50, 8:40, or 9:30 a.m. End times will vary by grade level depending on state requirements. Additionally, schools will add a weekly early release day to support common planning time and professional development for teachers."

Meanwhile, high-schoolers may love their new later starting time (either 8:40 a.m. or 9:30 a.m.). Dr. Matthews said this was based on new state law requirements and on research that shows later starting times for older students can improve physical and mental health as well as their academic performance.

Matthews said the new starting times would amount to the district saving millions of dollars each year in transportation costs.

The district's approach to the pandemic was much criticized by parents and community members alike, some of which staged sit-in protests in Dolores Park where they held outdoor class on Zoom this past winter.

Matthews talked about the opportunity seniors were given this year to learn in-person with their peers, starting with their highest need students. But that oportunity only came on May 14. His response was prompted by the California Department of Education.

"We intentionally scheduled a staggered rollout of our return to in-person learning - we started with 36 schools the week of April 12, adding 51 school sites the following week and growing to a total of 113 of our SFUSD schools by the last week of April."

But that wasn't good enough for the State's guidelines.

KTVU obtained a letter dated May 25 from State Superintendent of Public Instruction Tony Thurmond to Dr. Matthews. In it, Matthews is informed by the state that his district is out of compliance with state law Assembly Bill 86, which provides funding to local education agencies or districts to mitigate a year of lost learning. In exchange for the funds, the district was to provide the maximum amount of in-person learning by May 15.

Just this week, the district was accused of working a legal loophole to access $12 million in reopening funds without really reopening in-person learning to enough students.

Thurmond's letter says due to the district's lack of planning and adherence, it will be withholding those incentive funds from the district at least until SFUSD can demonstrate compliance.

"They don't qualify for the reopening dollars because they didn't meet the criteria," said State Assembly member Phil Ting, who wrote the bill - AB 86. He said the district doesn't deserve the $12 million in reopening funds. He was among the lawmakers who alerted the state that SFUSD did not meet the criteria to obtain the funding.

"It's just not fair to all the districts that followed the criteria, did what the law asked and reopened on time," Ting said.

Parents said they weren't surprised by the news and that the district has failed to serve its students.

"We are long past the time school should have reopened," said Supryia Ray, a mother of two SFUSD students. "What this looks like is a money grab. We certainly need the money. The kids deserve the money. This is apparently a huge fail on the part of SFUSD."

"My big fear is that they're saying that we'll go back, but we've been down this road before," said Tami Carter, also a mother of two students.

Dr. Matthews had initially planned on retiring this June, but last month he announced he was delaying his decision by a year after the board of education asked him to stay on until June of 2022.

That came after contentious negotiations between the district and the teachers' unions over how to go about implementing hybrid learning and returning to the classroom safely amid a pandemic. Teachers union representatives at that time said they had lost confidence in Matthews with the negotiations process and had sought a mediator.

In the end, Matthews said, "I know I speak for all of us at SFUSD when I say how excited we are to welcome everyone back on August 16."