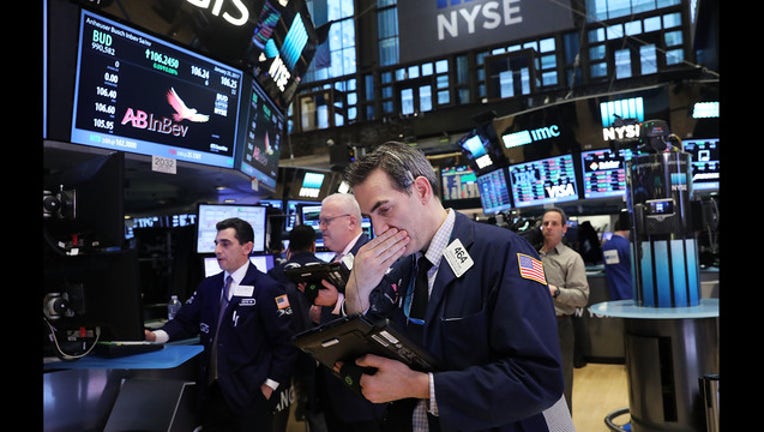 NEW YORK (AP) - Stocks plunged Thursday after the Trump administration slapped sanctions on goods and investment from China. The Dow Jones industrial average dropped more than 700 points as investors feared that trade tensions between the world's largest economies would escalate.

The planned sanctions include tariffs on $48 billion worth of Chinese imports as well as restrictions on Chinese investments. Trump said he's taking those steps in response to theft of American technology, and the Chinese government said it will defend itself. Investors are worried that trade tensions would hurt U.S. companies and harm the world economy.

Peter Donisanu, an investment strategy analyst for the Wells Fargo Investment Institute, said the risk of a damaging trade war is still low because the Trump administration is targeting specific goods that aren't central to China's economy. That could change if it puts tariffs on products like electronics or appliances imported from China.

"If the Trump administration really wanted to hurt China and start a trade war, then they would go after those larger sectors," he said. Still, Donisanu said that after last year's rally, investors are looking for new reasons to feel optimistic about stocks. With trade tensions in focus over the last month, they've had trouble finding any.

Earlier this month the Trump administration ordered tariffs on imported steel and aluminum, and stocks dropped as investors worried about the possibility of tougher restrictions on international trade and smaller profits for corporations.

Their fears eased when the administration said some countries will be exempt from the tariffs. That continued Thursday, as U.S. Trade Representative Robert Lighthizer said the tariffs won't apply to the European Union, Canada, Mexico, Argentina, Brazil and Australia.

Donisanu, of Wells Fargo, said the Trump administration isn't hostile to trade necessarily, but wants to get other countries to revise the terms of America's trade deals.

"This is probably intended to get China to get more serious in discussions around violations of intellectual property rights and addressing those issues," he said.

The decline in rates comes a day after the Federal Reserve raised interest rates and said the U.S. economy and the job market continued to improve over the last two months. The Fed expects to raise rates three times this year, although some investors think a fourth increase is possible. The Fed also said it might raise rates three more times next year instead of two.

AbbVie plunged after it reported disappointing results from a study of its cancer therapy Rova-T. AbbVie canceled its plans to ask for faster approval of Rova-T as a treatment for small cell lung cancer, but other studies are continuing. AbbVie shed $14.35, or 12.8 percent, to $98.10. Other health care stocks also sank.