It came as a surprise to Oakland-native Clifford Mapes. His house sits on a quiet dead-end street near Chabot Park. Still, someone dumped three large, heavy, tightly-tied bags in his compost bins last month. He discovered nearly 150 pounds of stolen mail inside.

OAKLAND, Calif. - It came as a surprise to Oakland-native Clifford Mapes. His house sits on a quiet dead-end street near Chabot Park. Still, someone dumped three large, heavy, tightly-tied bags in his compost bins last month. He discovered nearly 150 pounds of stolen mail inside.

“When I felt the bag, I thought that it felt like newspaper or something,” Mapes said. “When I ripped the bags open I noticed we had a lot of mail in there and most if it was open.”

Pieces of mail included letters from the IRS, unemployment information and checks, motor vehicle registrations, financial documents and other personal records. The addresses of the mail were from Oakland to Hercules to Elk Grove and Sacramento.

While it appears the mail was dumped in an unlikely place, incidents like this are becoming much more common. The United States Postal Inspection Service said mail theft is on the rise across California and has been for at least three years.

“These are federal crimes that we take very seriously,” Postal Inspector Jeff Fitch said. “The reporting is the key.”

Mapes and his neighbors turned the bags over to postal inspectors just hours after they were discovered. Investigators log each piece of mail in a database, send letters notifying victims and work to nab the thieves.

KTVU traced the mail to several addresses, including one apartment building on West MacArthur Boulevard, where residents posted signs warning of the potential of stolen mail.

“They break our doors and they steal the mail,” one resident said. “Oh my God, I wonder how much of my mail was in there.”

At several apartment buildings along Madison Street in Oakland, thieves are caught on camera, night after night using counterfeit keys to gain access to the building and the mailboxes.

Surveillance video from August shows one thief emptying mailboxes, taking as much as he can carry, then accidentally locking himself out of the building. Another thief comes to his rescue with a second copied key to steal more mail. In one week, four neighboring buildings were hit up, sometimes more than once, and by different criminals, the video shows. 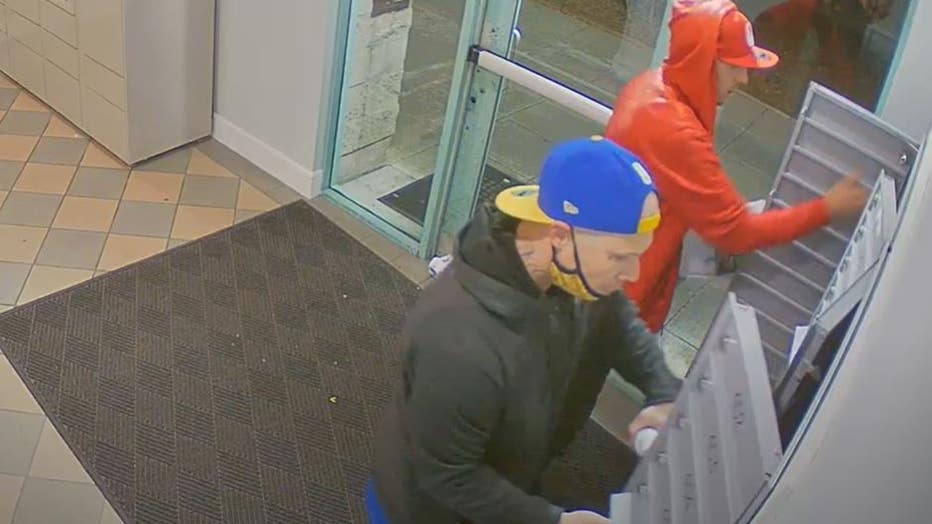 “Some of these individuals obviously feel comfortable,” Fitch said. “The mere possession of a counterfeit postal key is up to 10 years in federal prison.”

Mail theft is also punishable by up to five years in prison and a $250,000 fine. But prosecutions have hit a record low.

Data analyzed by the Transactional Records Access Clearinghouse at Syracuse University shows a 41% reduction in prosecutions for postal crimes compared to 10 years ago. The Postal Inspection Service did not immediately respond to questions as to why.

There is a standing reward of $10,000 for tips leading to the arrest and conviction of a mail thief.

“When your mail’s not safe – you can’t feel safe,” Mapes said.