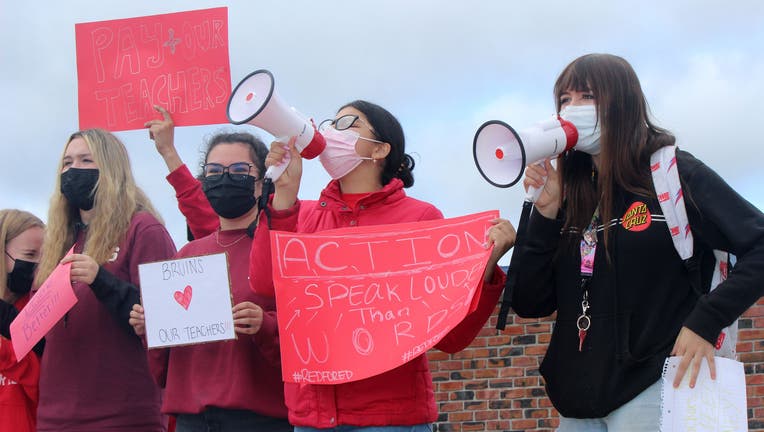 SAN JOSE, Calif. - Hundreds of students from five different campuses in the Campbell Union High School District walked out of their third-period classes on Thursday morning to protest a deduction in their teachers' paychecks.

Students from Prospect, Branham, Leigh, Del Mar and Westmont high schools wore red and made signs in an effort to send their message loud and clear to the district.

"Respect our teachers, support our staff and $500 less a month is a pay cut," said Judy Kassa, a junior at Prospect High School.

Kassa was one of three students at Prospect who organized the walkout through Instagram. The trio came up with the idea during their lunch break on Monday and posted an Instagram infographic Monday night with the intention of organizing at their campus only.

But by Tuesday the post made its way through students in five of the district's high schools and the walkout became bigger than expected.

Kassa and students wanted Superintendent Robert Bravo and the district to know they stand firmly with teachers as salary disputes between the district and the teachers' union continue to intensify.

Part of the dispute is that teachers are making $500 less per month than they did last year, or $5,000 less over the year. It is not because the district unilaterally decided to cut their pay -- legally it cannot do that. 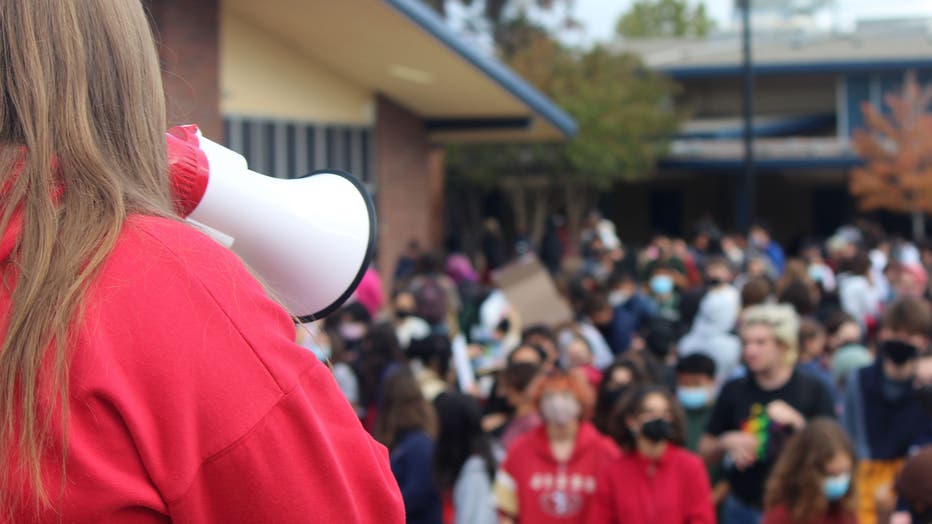 It's because the district and the teachers' union Campbell High School Teachers Association have not been able to reach an agreement on the last year of a three-year contract. So, teachers are being paid their base pay from 2019, without a promised raise, because that amount has not been agreed to yet.

Teachers are asking to maintain the amount from last year with an additional 4 percent raise to offset cost-of-living expenses, but instead of a raise, the district offered a one-time pay of $2,500.

At an Oct. 7 board meeting, Bravo said the district couldn't afford to pay teachers what they were asking because eventually it would drain out the reserves.

But to teachers and students -- that rationale is simply an excuse or worst case scenario projection as the district sits on a $48 million reserve.

In early October, the district shared projections that showed by the 2024-2025 school year, the district would run through its reserves fairly quickly and wouldn't be able to maintain the state-required reserve amount if the union's proposal was implemented for all employee groups. 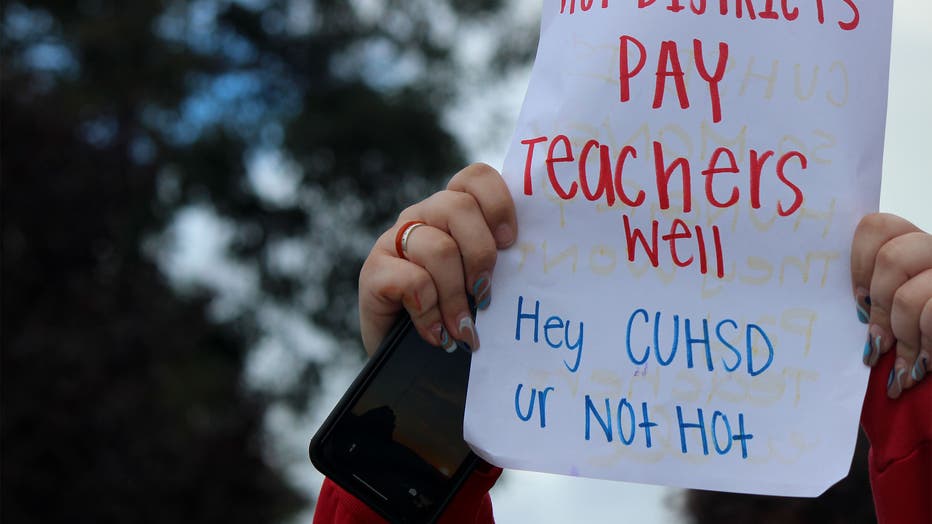 Students at Branham High School made their own posters to participate in a district-wide walkout to protest teachers pay on Thursday, Oct. 21, 2021 in San Jose, Calif. (Jana Kadah/Bay City News)

Some teachers called the projections misleading because the union's proposal is only negotiating for teachers.

If it was just applied to teachers, the district would have an ending balance of $16 million in the 2024-2025 school year, according to data from the district.

"We were just outraged at how our teachers are being treated with such a lack of respect," Kassa said. "We were like 'why don't we so something about it' because our voices were bigger than they are."

"Realistically with the amount of students that we have, we could affect so much change if we put our voices to use," Kassa continued.

At Prospect High, at least 200 students marched to the front of their campus to chant and hold their signs out for those who drove or walked past.

Kassa said she was initially worried that some students would participate simply to get out of class, "but once we saw many of them were actually wearing red shirts and clothing, that's when we knew that it was really genuine."

At Branham High, roughly 500 students funneled into the center of campus chanting "two four six eight, do not cut teachers' pay" and other supportive slogans. Many students also took the stage to share their frustrations. 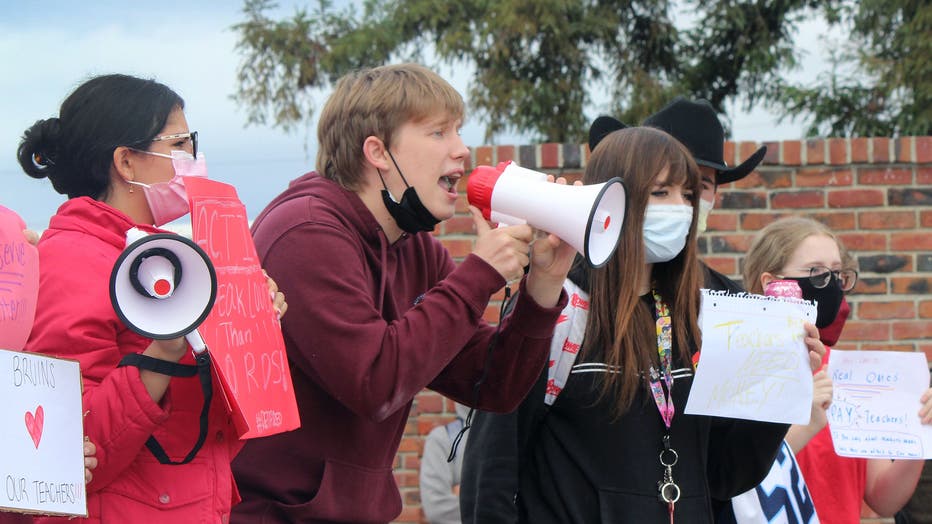 Jeremy Haven, a senior at Branham High School, yells in chants and shares his frustrations through the bullhorn during the student walkout on Oct. 21, 2021 in San Jose, Calif. (Jana Kadah/Bay City News)

"I literally have screenshots of teachers grading my stuff at 11 to 12 (at night)," Branham senior Jeremy Haven said. "Teachers are being overworked and being underpaid, and that's why I'm out here."

Both Haven and Kassa said they were galvanized through teacher testimonials.

"Teachers are having to cut food and take out of their kids' college education to pay for housing here," Haven said. "Hearing their stories and how some teachers were embarrassed to explain their personal life in order to get a better pay, really just fueled me with rage."

The district and the teachers' union are currently in impasse, meaning a mediator from the state is helping the two parties reach an agreement.

The district and teachers entered a three-year contract in 2019 that specifically outlined what the first two years' salary would look like, but left the 2021-2022 school year, which started in August, dependent on whether a parcel tax passed.

The parcel tax, proposed to voters twice, failed both times so CHSTA and CUHSD had to come back to the negotiating table.

They had their first impasse meeting on Monday and will have their next one Nov. 15. 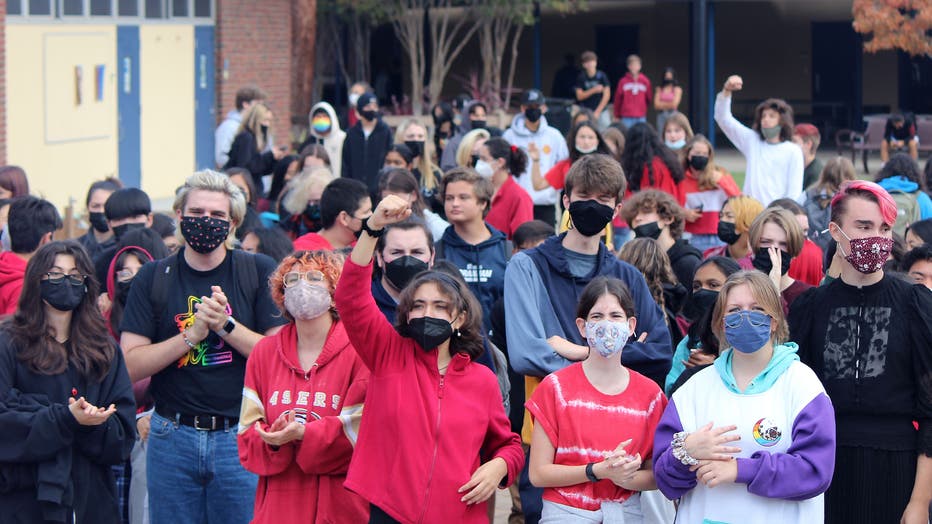 But Nick Cortez, a bargaining chair for CHSTA and special education teacher at Branham, said with the way things have been going, he believes it will be months before an agreement is reached.

"I've been teaching for 14 years. I've been in three school districts," Cortez said. "This is the worst I've ever seen, you know, and it's not just about the money."

He said it's also the way the district has communicated to parents about contract negotiations.

In several emails to the campus community, Bravo and board president Kalen Gallagher tried to dispel claims that teachers were experiencing a pay cut.

On Wednesday, Bravo's email called the teacher's claims that pay was cut by $5,000 "erroneous."

In a statement, Bravo said the district was supportive of students and their activism.

"Although the allegation that the district is reducing pay by $5000 is false, we continue to be committed to negotiating and reaching an agreement that is fair and equitable to all parties," Bravo said.

Cortez said to phrase emails like that, "portrays teachers as liars which is just disgusting and inappropriate."

He said it also undermines the trust between teachers and parents, students and especially the district.

"The problems are much deeper than the money -- it's the disrespect, it's the lack of support, it's lack of listening and understanding," Cortez said. "I think people would be OK if all the other issues weren't there."

But many teachers are looking to leave, he said. Last year, there were about 50 new teachers out of 413 teachers in the district.

"That's a pretty high percentage of turnover, and I only imagine it's going to get worse," Cortez said.

In fact, 72 percent of the teachers were considering leaving the district because of their frustrations with the board and lower pay than neighboring districts, a CHSTA survey found. And Cortez is one of them.

"I don't think I could stick around very long. I love my students and the staff here," Cortez said. "But this district office is broken and it's harmful to our community it's harmful to the people around here."

Students worried that teachers leaving would eventually impact them.

"Teachers possibly leaving is part that really like scares me the most," Kassa said. "They're not just my teachers or my coaches, they're like somebody to talk to and I have so many that are so understanding in times of crisis and times of need." 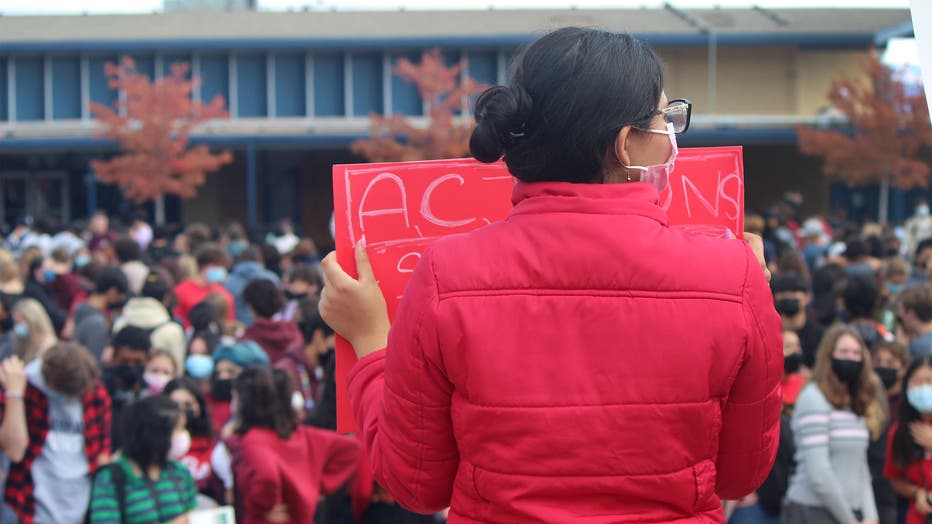 Branham High School freshman Avishawd Yarisaied stands in front of the hundreds of students who participated in the walk out on Oct. 21, 2021 in San Jose, Calif. (Jana Kadah/Bay City News)

Branham freshman Avishawd Yarisaied, who led the students in chants throughout the 45-minute walkout, said this was her first protest.

"I came up here to share my voice and encourage my peers to do so as well because teachers do deserve better," Yarisaied said. "Teachers are so much more than just support in the academic realm."

Students said they were hopeful their activism would influence the district to pay teachers what they are asking -- or at the very least pay them what they were making last year.

"It's sad that the teachers voices alone did not impact them as much as it should have, but I think now that this issue has become on a bigger scale," Kassa said. "Hopefully this will in some way push them in the right direction."

But if it doesn't, some students made it very clear they are not going anywhere.

"I will be at the forefront of supporting my teachers all the way until they get what they deserve," Haven said.