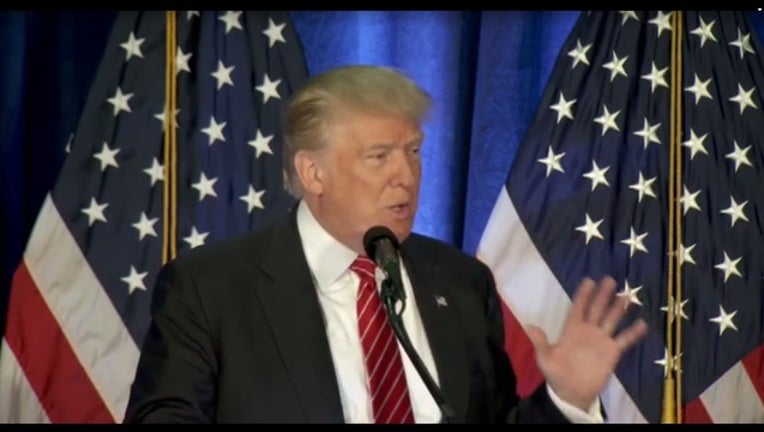 Donald Trump speaking live on Aug, 15, 2016 to lay out his plan to combat terrorism.

WASHINGTON (AP) — Donald Trump defeated 16 rivals in the Republican primaries by being the most anti-immigrant of them all, promising to build a giant wall on the border and deport millions. He labeled opponents like Jeb Bush and Marco Rubio as weak and amnesty-loving, and his extreme rhetoric pushed the entire immigration debate to the right.

But suddenly, Trump is sounding like some of the people he defeated. In an appearance on Fox News Channel's "Hannity" show Wednesday, Trump discussed how tough it is to break up families for deportation, suggesting that maybe upstanding people who've been in this country for years should be allowed to stay if they pay back taxes and insisting, just as Bush and Rubio were repeatedly forced to do, that such actions would not amount to "amnesty."

"Everywhere I go I get the same reaction. They want toughness. They want firmness. They want to obey the law," Trump said. "But they feel that throwing them out as a whole family when they've been here for a long time, it's a tough thing."

Trump's exact meaning was murky. And it was unclear if he was unveiling a new stance or simply trying out new rhetoric to appeal to a general election audience as he lags Democrat Hillary Clinton in polls 11 weeks before the election. His new campaign manager, Kellyanne Conway, insisted on CNN Thursday that "nothing has changed in terms of the policies."

And Trump seemed to backtrack yet again less than 24 hours later, saying on CNN's "Anderson Cooper 360" Thursday evening that he would not grant any legal status to immigrants here illegally unless they leave the United States first, something that would be burdensome and impractical when applied to millions of people. "There is no path to legalization unless they leave the country and come back," he said.

Still, Trump's new language seemed to reveal an awareness that his unyielding stance against immigrants is unlikely to get him to the White House, with Latinos voting in growing numbers in key states.

"He's learned painfully, belatedly, that what stirs up a large part of the Republican primary electorate is not what wins general elections," said John Rowe, a GOP donor and former CEO of Exelon, who's planning to vote for libertarian Gary Johnson. "You cannot win without women, Asians, Latinos, African Americans."

In an interview Thursday on ABC, Bush called Trump's positioning "abhorrent," saying: "I can only say that whatever his views are this morning, they might change this afternoon, and they were different than they were last night, and they'll be different tomorrow."

Clinton, speaking on CNN, dismissed Trump's shifting language as "a desperate effort to try to land somewhere that isn't as devastating to his campaign as his comments and his positions have been up until now."

There were signs that Trump risked angering hard-core supporters who helped him win the nomination. Conservative commentator Ann Coulter, who published a book called "In Trump We Trust," reacted with angry tweets to Trump's comments on Fox, including remarking sardonically "Well, if it's 'hard,' then never mind."

GOP Rep. Steve King of Iowa, a leading immigration hardliner, said in an interview that "I have some concerns at this point" over Trump's stances.

The upside for Trump was not immediately apparent. Immigrant advocates argued he would gain no ground with Hispanics by giving lip-service to limited pro-immigrant measures while still insisting on the need for a border wall. Advocates speculated that Trump's goal was to woo independent voters who might support him but are turned off by his harsher stances.

"Look, when you launch your campaign saying Mexican immigrants are rapists, drug dealers and murderers, I don't know there's a lot you can say to recover," said Democratic Rep. Luis Gutierrez of Illinois.

After beginning his campaign asserting that Mexican immigrants "are rapists," and are "bringing drugs," Trump built an image as the one candidate who would expel immigrants in the country illegally, pledging a "deportation force" to send all 11 million home.

Opponents including Rubio, Bush and Ohio Gov. John Kasich denounced Trump's proposals, insisting there was no way to eject 11 million people from the country. But as Trump gained support, his opponents were forced to modulate their stances, as even those like Rubio who had supported a path to citizenship for people in the country illegally put the focus on border security first.

Trump was quick to ridicule his opponents. "Marco Rubio is totally weak on illegal immigration & in favor of easy amnesty," Trump declared over Twitter last fall. After Bush claimed that illegal immigration could be described as "an act of love," an Instagram video Trump posted showed the words, "Forget Love! It's time to get Tough!"

Yet now it's Trump talking about allowing immigrants in the country illegally a way to stay here.

"I would say it's nice to see Donald Trump acknowledge that he was wrong and that his opponents were correct," said Chris Schrimpf, a spokesman for Kasich. "What one hopes is that Donald Trump actually believes and knows he was wrong, and isn't just saying something in an attempt to get elected."