Study: Superbug MRSA can stay on household surfaces for months

Throughout the course of a year, researchers visited 150 households on five separate occasions to collect swab samples from each human and animal participant and to test household surfaces for staph so that they could better understand how infections spread in the home.

ST. LOUIS - The deadly superbug methicillin-resistant Staphylococcus aureus, commonly referred to as MRSA, which is most commonly spread from person to person, can actually linger on household surfaces for months, often causing repeat infections in the same patient or strings of infections across families, new research shows.

MRSA used to be quite rare, but antibiotic overuse and misuse has made MRSA more resistant to standard infection-fighting treatments. Now the resistant and highly-contagious bacteria makes hundreds of thousands of people in the United States sick every year, killing about 20,000.

RELATED: Antibiotic-resistant superbugs kill 35K Americans each year — and CDC warns worst is yet to come

New research from Washington University School of Medicine in St. Louis, conducted with researchers at the University of Chicago, evaluated the introduction and spread of MRSA within a household after noticing a recurrence of infections among family members. Their findings were published Nov. 21 in The Lancet Infectious Diseases.

“The household environment plays a key role in the transmission of MRSA in the community setting,” said the study’s senior author, Stephanie A. Fritz, MD, a Washington University associate professor of pediatrics in the Division of Pediatric Infectious Diseases. “This suggests that aggressive attempts to rid MRSA from household surfaces may significantly lower the number of MRSA infections we’re seeing now.”

“It wasn’t just one patient who would get a staph infection but multiple members of a family,” said Fritz, who treats patients at St. Louis Children’s Hospital. “Within a year, we’d see many patients return with recurring infections. We felt it was necessary to focus on the specific role that household environments play in MRSA acquisition and transmission.”

Staphylococcus aureus is commonly known as staph, and about one-third of the human population have it living harmlessly on their skin. Person-to-person transmission is the most common cause of infection, but it can also be spread by touching a contaminated surface. Once the infection takes hold, it manifests as a pus-filled lump which looks a bit like a bug bite.

Staph becomes incredibly dangerous if it enters the bloodstream, bones or organs, where it can cause pneumonia, severe organ damage and death.

Researchers analyzed 150 households of otherwise healthy children around the age of three, who were selected because they had been treated for staph infections between 2012 and 2015. Additionally, researchers studied almost all of the children’s family members and pets.

Throughout the course of a year, researchers visited each household five times, each time collecting swab samples from each participant’s nostrils, armpits and groins. For cats and dogs in these households, researchers collected samples from inside the nose, as well as “the main petting zone” — the animal’s back.

Almost half of the human study participants and one-third of the pets sampled for the study were found to have MRSA on them at least once over the course of the year-long study.

Fritz, the lead author of the study, points to the takeaways she and her team learned from pets as being particularly interesting.

“It’s sometimes thought that cats and dogs spread harmful germs,” Fritz said. “We thought they might be a reservoir for the staph germ and play a role in its spread. But our study showed that cats and dogs were more likely to get staph from humans than the other way around.” 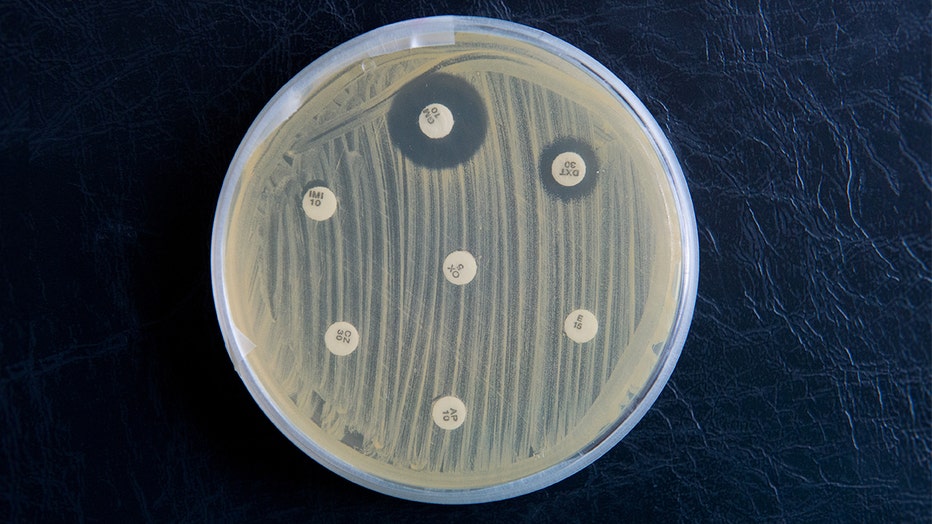 MRSA germs can be seen in a petri dish at the Institute for Hygiene and Public Health in Hamburg, Germany, 19 September 2017. (Daniel Reinhardt/picture alliance via Getty Images)

They collected a total of 3,819 samples and performed a molecular analysis on each one, which creates a sort of “bacterial fingerprint” that indicates to researchers which strains of staph are present and allows them to pinpoint exact transmission dynamics of each strain.

“Previous studies have not distinguished between staph strains,” Fritz said. “By parsing it out, we were able to determine different risk factors for how the staph germ gets into the house and then, once there, how it is spread. The prevailing wisdom is that staph is transmitted from person to person, and that is often true. But our study shows that the household environment also serves as a key reservoir for ongoing staph transmission. In fact, there were a number of instances in which the environment was the only potential source for transmission.”

“Household acquisition of MRSA is driven equally by the introduction of new staph strains into a home and transmission of established strains among family members within a household,” Fritz added.

Finally, study participants were surveyed about their hygiene habits.

“Using genetic and epidemiological data can help us find treatment plans and preventive measures,” said Patrick Hogan, a clinical research specialist at the School of Medicine and study co-author responsible for analyzing much of the data. “For example, we can tell people what they should stop or start doing to reduce the risk of staph infections.”

People who wash their hands frequently with soap are the least likely to bring staph into the home, and proper and frequent hand-washing is one of the best ways to reduce the risk of infection.

When it comes to staph entering the household, researchers found that children who go to day care are more likely to bring staph home with them.

Once staph is already present in a household, the more surfaces it contaminates, the more likely it is to spread to people, and this is amplified in rented or crowded homes in which many people come and go. Sharing can also lead to the spread of staph, including sharing a bedroom, bed, towels, razors, toothbrushes and more.

Cleanliness in the home and personal hygiene are the best weapons against the spread of staph in the home and the spread of infections among people. In addition to keeping the home clean, researchers suggest preventative measures such as showering instead of taking baths, using antibacterial liquid hand soap, and brushing your teeth at least twice a day.

“It’s not a good idea to share personal hygiene items,” Hogan said. “However, the biggest take home, as cliché as it may sound, is to wash your hands frequently. It offers the best protection from acquiring MRSA.”