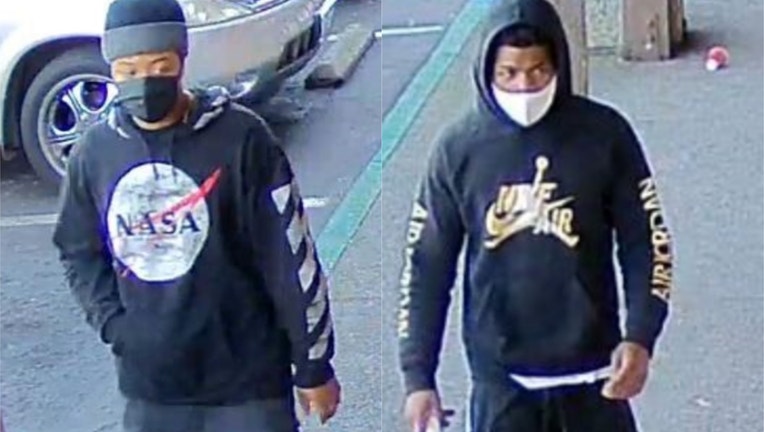 The El Cerrito Police Department released photos of two suspects wanted in connection with a carjacking.

EL CERRITO, Calif. - Police are searching for the suspects who carjacked a woman outside a Mexican restaurant in El Cerrito on Tuesday.

The carjacking happened around 3:46 p.m. in the parking lot of Los Moles Restaurant at 6120 Potrero Avenue.

According to the El Cerrito Police Department, a 48-year-old woman was seated in the driver's seat of her Black 4-Door 2016 Toyota Camry, when she was approached by two people.

Authorities said one suspect opened the driver's door and pulled her out of the car and threw her to the ground, while the second suspect entered the passenger side of the vehicle.

The suspect who threw the woman from her vehicle entered the driver's seat and both suspects drove away in the victim's vehicle and were last seen going west on Potrero Avenue, towards Interstate 80, authorities said.

The woman's car has still not been located. The car's license plate number is 7TAM327.

Authorities described one of the suspects as a Black man in his early to mid-20s, average build, black beanie cap with grey trim and white rectangle logo on rear, black face mask, black hoodie with white diagonal stripes on hood and sleeves, and NASA logo on front, dark grey pants. The second suspect was described as a Black man in his early to mid-20’s, slender build, medium black natural hair, black hoodie with gold NIKE AIR logo on chest and both sleeves, hood pulled over the head, white face mask, black track pants with a single wide vertical stripe on the outside of each leg.