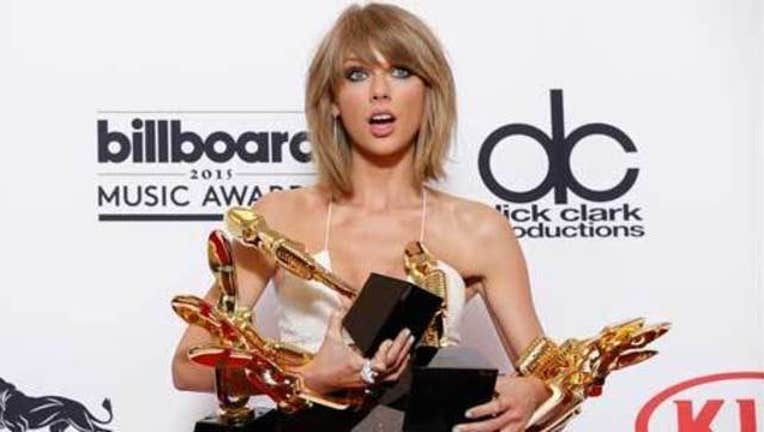 LAS VEGAS (AP) — Taylor Swift had a historic night at the Billboard Music Awards: The pop star is the most decorated artist in the show's history with 20 wins, beating Garth Brooks' 19-win record.

She won eight awards Sunday night at the MGM Grand Garden Arena in Las Vegas, including top artist, and also opened the show with the premiere of her action-filled, star-studded music video for "Bad Blood."

"It's unbelievable that the fans went out and proved what they proved this year, and that's the only reason I won eight awards," Swift said in an interview with The Associated Press following her wins.

"Is it eight? Did I win eight awards?" she asked excitedly. "Yeah, sick."

Swift's video opened with her and Selena Gomez fighting men in an office and then fighting each other. It ended with Swift's and Gomez's armies going head to head. Other stars in the clip included Mariska Hargitay, Ellen Pompeo, Jessica Alba and Ellie Goulding, and Hayley Williams of Paramore.

Swift swapped her first two verses with new ones from rapper Kendrick Lamar for "Bad Blood," a song rumored to be about Swift's friendship with Katy Perry.

Swift's other wins included top female artist and Billboard 200 album for "1989." She sat in the audience with some of her "Bad Blood" co-stars as well as rumored boyfriend Calvin Harris. Swift kissed the DJ-producer-singer on the cheek and gave him a hug after winning her awards.

"I'm happy right now that it all was pulled off without a hitch," an excited Swift said in the AP interview about her new video. "I can't believe it didn't leak. I can't believe the Kendrick version of the song didn't leak. Right now I am just taking the biggest sigh of relief that the fans got to experience it the way I wanted them to experience it, which was a full element of surprise."

Though Swift had an epic open of the Billboard Awards with her video, Kanye West's closing off the show was tragic. The rapper was booed in Las Vegas when he performed "All Day" and "Black Skinhead." The stage was smoky and it was hard to see West at times.

"And now a doctor," Kylie Jenner said when introducing West, who earned an honorary doctorate from the Art Institute of Chicago.

Others had a good night though onstage. Iggy Azalea, Pharrell and Sam Smith — who is recovery from vocal cord surgery — won three awards each.

One Direction picked up two awards and gave a shout-out to former band mate Zayn Malik.

"There is one more person to share this with, and that's our brother Zayn," Liam Payne said when the boy band won top duo/group.

Van Halen was the night's first performance and rocked the crowd with its 1984 hit "Panama." The Simple Minds, introduced by Molly Ringwald, performed "Don't You (Forget About Me)" from "The Breakfast Club," which is celebrating 30 years.

Britney Spears sported a sheer black cat suit when she performed "Pretty Girls" with Azalea; Mariah Carey, who recently launched a Vegas residency, was pitchy when she sang "Vision of Love" and new single, "Infinity," though she ended with a strong high note; and Nicki Minaj's performance of "Hey Mama" and "The Night Is Still Young" featured her dancing more than singing or rapping as she relied on a backing track.

The night had some emotional moments, too: Chris Brown entered the red carpet holding his daughter Royalty; Ludacris offered some words about the late B.B. King and his renowned career; and a teary and shaky Meghan Trainor won hot 100 song and digital song for "All About That Bass."

"I have to thank, of course, my beautiful co-host, my lovely wife, Chrissy Teigen," Legend said when he won top radio song for "All of Me."

"I am so proud that we won this award together tonight."

Hosts Ludacris and Teigen offered some jokes Sunday night: The rapper described why he's a good host, namechecking his music and acting credits. Teigen, a model, replied, "And I bang a musician" as Legend stood up.