A family took advantage of freezing conditions in Hurst, Texas, and built an outdoor ice rink on February 16.

HURST, Texas - One Texas family decided to make the most out of a very cold and unexpected winter storm and built an outdoor skating rink.

Adam Kegg posted a video to Twitter on Tuesday from his home in Hurst, Texas, showcasing his homemade ice skating rink, which his children seemed to thoroughly enjoy.

In the video, Kegg is seen with his daughter skating around the ice rink while he pulls his other daughter along in a basket. 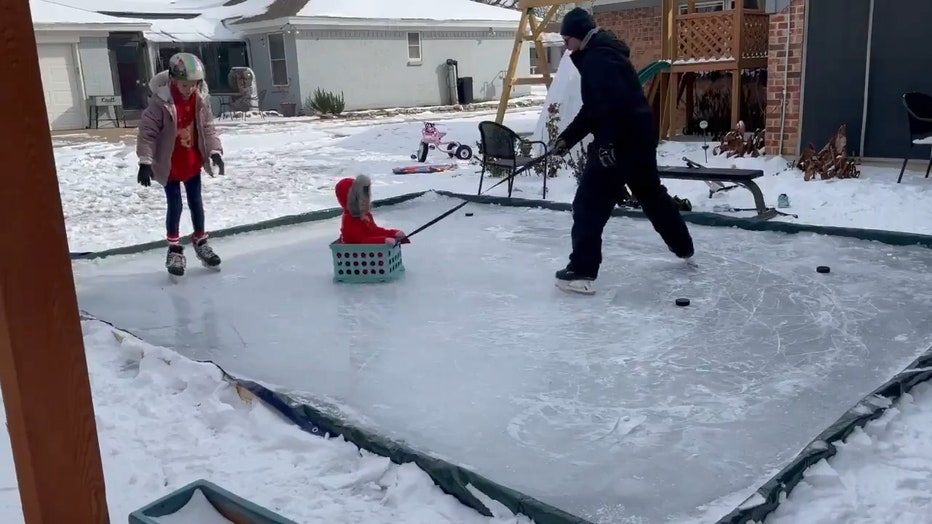 Adam Kegg ice skating on his homemade rink with his daughters.

"Winter classic at Hurst," Kegg wrote in his tweet.

Hurst, which is just southwest in relation to the Dallas-Fort Worth International Airport, has braved single-digit lows and high just reaching the mid-teens the past few days amid a frigid winter storm.

The Dallas-Fort Worth areas recorded its coldest temperatures of -2 degrees, which is the lowest recorded temperature since 1949 according to the National Weather Service.

Millions of residents are without power and the record-breaking cold weather claimed more lives Tuesday, including three people found dead after a tornado hit a seaside town in North Carolina and four family members who perished in a Houston-area house fire while using a fireplace to stay warm.

RELATED: Record-setting winter storm charges across the US, with 2nd storm on the way

The worst U.S. power outages were in Texas, affecting more than 2 million homes and businesses. More than 250,000 people also lost power across parts of Appalachia, and another 200,000 were without electricity following an ice storm in northwest Oregon, according to poweroutage.us, which tracks utility outage reports. Four million people lost power in Mexico.

Texas officials requested 60 generators from the Federal Emergency Management Agency and planned to prioritize hospitals and nursing homes. The state opened 35 shelters to more than 1,000 occupants, the agency said.

More than 500 people sought comfort at one Houston shelter. Mayor Sylvester Turner said other warming centers were closed because they lost power.

After losing power Monday, Natalie Harrell said she, her boyfriend and four kids sheltered at a Gallery Furniture store in Houston. The warming center at the store provided people with food, water and power to charge essential electronics.

"It’s worse than a hurricane," Harrell said. "I think we are going to be more days without light, that is what it seems like."

Utilities from Minnesota to Texas implemented rolling blackouts to ease the burden on power grids straining to meet extreme demand for heat and electricity.