Speaking during the daily White House Coronavirus Task Force briefing in April, Trump was asked whether or not going forward with the event would be safe, to which he replied, “We’re going to probably have 25 percent of what we had last year.”

LOS ANGELES - Though the Trump administration is promising one of the largest fireworks displays in recent memory in Washington on July Fourth against warnings from medical experts, the National Archives, the nation’s record keeper, has announced that it will host its first-ever virtual celebration of the holiday.

“With a host of online programming, educational opportunities, and a special presentation of the traditional reading ceremony, this Independence Day will be as patriotic as ever,” the National Archives wrote on its website.

The virtual celebration will begin at 11 a.m. ET, with remarks from official Archivist of the U.S. David S. Ferriero.

The event will host an array of educational speakers, Q&As on the foundation, as well as discussions on various items of great historical significance to the country.

July Fourth comes as Americans are dealing with surging cases of COVID-19 and confusion over best practices in public, especially on masks. Trump has been criticized for pushing to go ahead with large campaign rallies and other public gatherings, like the upcoming holiday event, despite the increased risk of infection.

While Independence Day has always been an chance for communities to gather with daylong festivities, patriotic parades and epic displays of fireworks, many state and local officials are urging people to stay home this year.

Among those deeply concerned is Washington, D.C. Mayor Muriel Bowser, who doesn't have the right to shut down Trump's holiday spectacle because it's on federal land, but warned the federal government about the obvious dangers of such a large crowd. 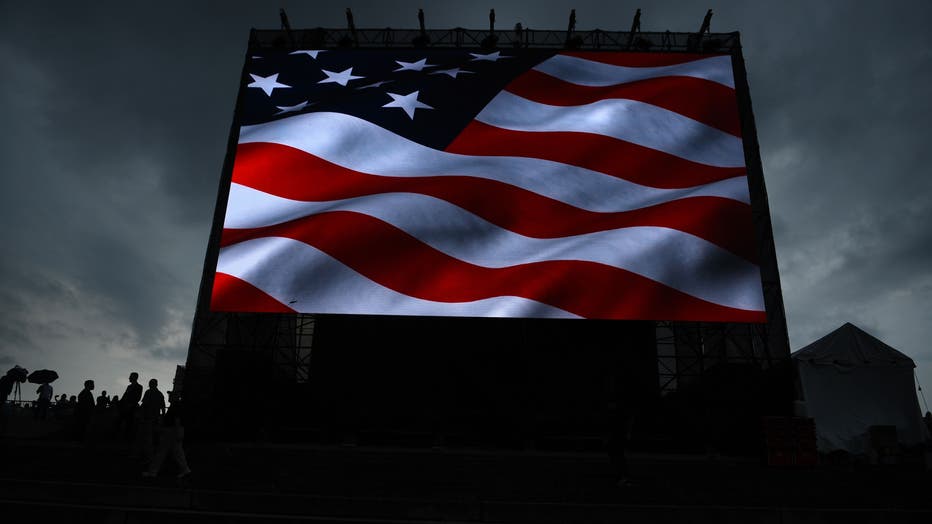 FILE - A man walks past a screen with the US flag as people gather on the National Mall ahead of the "Salute to America" Fourth of July event with US President Donald Trump at the Lincoln Memorial in Washington, D.C. on July 4, 2019.

Bowser said she had briefly read through the Interior Department's statement on the July Fourth plans and believed they were not consistent with established health guidelines.

“We know this is a special event for the Department of Interior. We’ve communicated to them that we do not think this is in keeping with the best CDC and Department of Health guidance. But this event will take place entirely on federal property,” Bowser said.

In many cities around the U.S., leaders are grappling with how to honor the country’s Independence Day while forced, because of coronavirus concerns, to limit some freedoms their citizens so deeply covet.

“This is traditionally a weekend for gathering in large groups for historic ceremonies and social events,” Boston Mayor Marty Walsh said. “This is not something that we can do this year here in Boston or in Massachusetts.”

Trump’s July Fourth celebration on the National Mall will feature one of the largest fireworks displays ever and as many as 300,000 face masks will be given away to those who want them — but despite health concerns from D.C.'s mayor, no one apparently will be required to wear them.

Trump made no mention of the masks or of the pandemic overall in a tweet Wednesday on his Independence Day plans. He thanked corporate donors for supporting “what will, without question, be a special evening.”

“President Trump’s 2020 Salute to America will be a patriotic tribute to our men and women in uniform,” Bernhardt said in a statement.

A mile-long firing of 10,000 fireworks will be “the largest in recent memory,” he said.