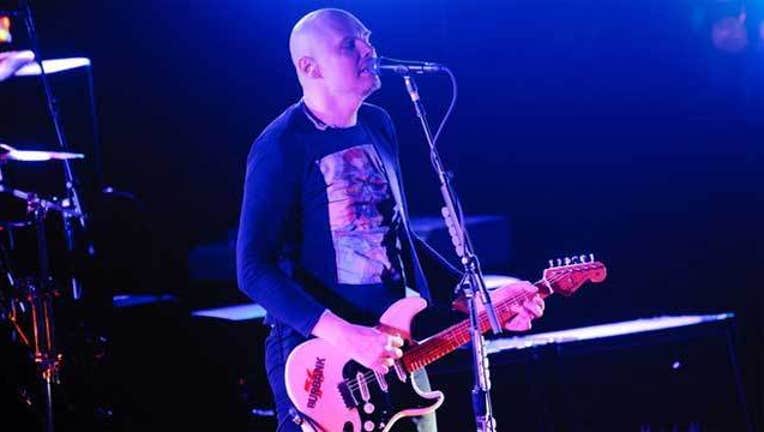 Two of the biggest hitmakers of the '90s team up for a summer tour that kicks off with a local show when the Smashing Pumpkins and Marilyn Manson bring their End Times Tour to the Concord Pavilion Tuesday night.

Formed in Chicago in the late 1980s by guitarist and principle songwriter Billy Corgan, the Smashing Pumpkins would become one of the biggest bands of the '90s alternative-rock revolution. First garnering wide notice with their 1991 debut Gish, the band crafted a sound that touched on the gothic guitar orchestrations of the Cure with elements of metal, dream pop and psychedelia that earned them comparisons to Jane's Addiction.

It wasn't until the release of Siamese Dream in 1993 that the band crossed over to mainstream success. Powered by the hit MTV singles "Today," "Cherub Rock" and "Disarm," the album became a massive hit and elevated the band to arena-headlining status despite growing tensions among members (the relationship between guitarist James Iha and bassist D'arcy Wretsky disintegrated before the album was recorded, while drummer Jimmy Chamberlin struggled with alcohol and heroin addiction).

The ambitious follow-up effort Mellon Collie and the Infinite Sadness, a double CD featuring the radio singles "Bullet With Butterfly Wings" and "1979," cemented the quartet's status as one of the most successful rock bands of the decade. Unfortunately, continuing turmoil led to Chamberlin's firing in 1996 after the heroin overdose of touring keyboard player Jonathan Melvoin. The group would continue in a more electronic direction with Adore in 1998, but eventually split up after a final farewell show in Chicago in 2000.

After spending a better part of the '90s redefining electric guitar rock, Corgan took steps in a decidedly different direction both with his group Zwan (which also featured Chamberlin) and on his first proper solo release, 2005's The Future Embrace. But since Corgan had taken out a full-page ad in Chicago Tribune revealing his desire to reform the Smashing Pumpkins just prior to the tour supporting that album, many fans held out for the inevitable resurrection of the group that came to fruition with the 2007 album Zeitgeist.

Though critics weren't kind to that effort, the chance to see Corgan and longtime collaborator Chamberlin on the drums alongside new members playing classic Pumpkins tunes as well as new material was too much for local fans to resist as Corgan and company quickly sold out an 11-night run of shows at San Francisco's Fillmore that year.

Chamberlin would later departe the group, leaving Corgan to find not just a new drummer but put together an entirely revamped line-up of the band with guitarist Jeff Schroeder (a member since 2007), drummer Mike Byrne and bassist Nicole Fiorentino. That line-up of the group played on the songs of the Pumpkins' latest and possibly most ambitious effort, the 44-song epic Teargarden by Kaleidyscope that included the 2012 album Oceania.

While Schroeder remains in the band, this time Corgan returns to the road with a couple of noted players filling out the Pumpkins as Rage Against the Machine/Audioslave drummer Brad Wilk and Killers bassist Mark Stoermer share the stage with the guitarist. The band mixes classic songs with tunes from the new Smashing Pumpkin effort Monuments to an Elegy when they take the Concord Pavilion stage with Marilyn Manson.

A protege of Nine Inch Nails leader Trent Reznor, Brian Warner took on the stage name Marilyn Manson as part of the band the Spooky Kids while going to college in Fort Lauderdale. After discovering the group, Reznor produced their 1994 debut, Portrait of an American Family, issued it on his Nothing Records label and took them out on a national tour promoting the landmark NIN album The Downward Spiral.

Reznor would co-produce the band's breakout effort Antichrist Superstar in 1996, but Manson edged further into the mainstream with the concept follow-up album Mechanical Animals that took it's inspiration from glam-era David Bowie. Most of the following decade found the singer remaining a popular touring attraction, but his albums were met with more and more critical indifference. It was Manson's successful pursuit of a second career as an actor that brought him into contact with his latest collaborator. He met composer Tyler Bates in 2013 after acting on the HBO show Californication and the following year ended up recording the blues-infused effort The Pale Emperor that was released to solid notices.