An emotional meeting was held Monday in Sonoma County regarding the review of the death of a man in custody who was driving his own car, but law enforcement thought it was stolen. The man ended up being put in a choke hold and died.

PETALUMA, Calif. - An independent, non-police Sonoma County agency hosted a town hall meeting Monday night following the death of a man who was killed by sheriff's deputies who stopped him because they thought they spotted his stolen car, only to discover later that the he was rightfully driving his own Honda.

And several community members came out to criticize the use of excessive force by the deputies involved and officers in general.

The Independent Office of Law Enforcement Review and Outreach group, formed by the board of supervisors in 2015, held the gathering so that community members could get up to speed on the investigation into David Ward's death. Sheriff Mark Essick was invited to come, but declined to attend.

The agency's director, Karlene M. Navarro, said her office, along with many community members, have not had all their questions answered regarding Ward's death nearly two months ago. The 52-year-old died after deputies say he didn't comply with their orders to stop, and they used a stun gun and a carotid hold on him. One deputy also slammed Ward's head into his own car, video released by the sheriff shows.

"I was just devastated," Elizabeth Cone, another community activist, said at the meeting. "I just felt ashamed to be part of a community where this could happen."

Navarro, whose office has the power to recommend policy changes to the sheriff, said that people have been reaching out to her to tell her how upset they are, that "watching the video make them sick to their stomach." 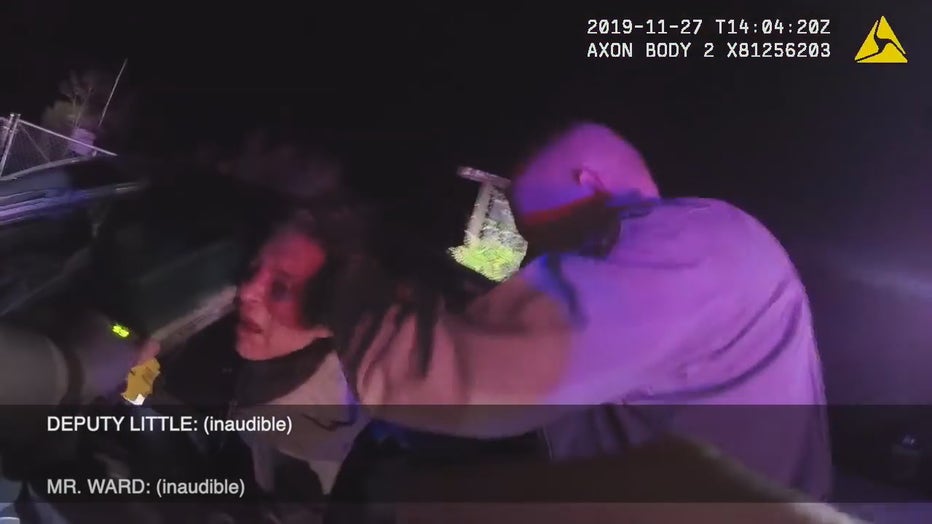 Navarro's office is still waiting data from the sheriff on how often this maneuver, which is also called a sleeper hold, is used. The hold is applied when a person uses his or her arm to put pressure on the sides of a person’s neck, which — if applied correctly — can cause someone to quickly fall unconscious.

In December, Navarro said she wanted to follow in the footsteps of departments such as San Francisco and prohibit the use of the carotid hold. The sheriff said he would not disband the maneuver.

The discussion stems from what occurred around Thanksgiving.

On Nov. 24, 2019 Ward had reported that his Honda had been carjacked and that the suspect had been armed.

Deputies spotted the car on Nov. 27 and tried to pull the driver over. The driver didn't stop, deputies said, and led them on a short chase.

When deputies finally got the driver to stop, they yelled at him to get out of the car. He didn't. Ward's sister and mother told KTVU that he had physical disabilities and couldn't move very fast. Body camera video at the scene provided by the sheriff shows Deputy Jason Little using a stun gun on Ward while Deputy Charlie Blount put him in a carotid neck hold and slamed the man's against the car.

Ward died shortly after this encounter.

It is still unclear why Ward did not stop for the officers or why he didn't report that he had recovered his stolen car that morning. Ten days after Ward died, deputies arrested Driden Adrian Estrada, Ward's caretaker, for the carjacking.

Last month, Essick made the unusual announcement that he moved to terminate Blount. There has been no move as of yet to terminate Little, according to the Santa Rosa police department, who is investigating the officer-involved death.

As of this week, Santa Rosa police also have not concluded their investigation into the matter and have not forwarded the case to the District Attorney, said Lt. Dan Marinick.

Blount's attorney countered that Ward "caused his own death by inexplicably taking a number of bizarre actions that confirmed in the deputies’ minds that he was an armed car-jacker, rather than the victim of that crime."

On Monday, Marin County Chief Deputy Coroner Roger Fielding said that Ward's autopsy is not yet complete and will likely take a few more weeks.

But some community members said they don't need official results from the medical examiner to tell them what they saw with their own eyes.

"Nobody told him, 'Stop, back off,'" defense attorney Evan Zelig said. "And that starts with the culture."