PESCADERO, Calif. - Thousands of residents are under evacuation orders in Santa Cruz and San Mateo counties where 22 small fires have merged as one known as the CZU August Lightning Fire Complex.

The fire has burned 25,000 acres with zero percent containment and at least 20 structures have been destroyed.

Cal Fire said the structures that burned down are single-family homes.

As of Wednesday night, the winds were moving south driving flames closer to towns like Bonny Doon and Boulder Creek in Santa Cruz County. In San Mateo County, the fire is threatening the communities of La Honda and Pescadero.

“Over there, I think we are watching the place that my family has loved and helped to take care of our whole life,” said Janelle Bartlett of Pescadero.

As wildfire smoke looms overhead, Janelle Barlett packs up and fears her family’s business Venture Retreat Center in Pescadero in San Mateo County may no longer be standing.

Thousands of residents are under evacuation orders in Santa Cruz and San Mateo counties where 22 small fires have merged as one known as the CZU fire.

“The building itself is over 100 years old,” said Barlett. “I believe all of its history is being burned right now and I just can't believe it.”

The Barlett family is among the evacuees of the raging CZU fire, named after the Cal Fire San Mateo-Santa Cruz unit fighting the blaze.

The fire is divided into the northern zone threatening the communities of La Honda and Pescadero in San Mateo County.

The southern zone is in Santa Cruz County. The fire is west of Empire Hills Road, impacting the town of Bonny Doon and moving toward Boulder Creek, Ben Lomand and Felton.

There was an early morning window for an air attack in Bonny Doon but the smoke was so heavy, aircraft was then grounded Wednesday.

Other challenges include where the fire is burning is heavily forested with redwoods and it’s remote.

“We use the term inaccessible a little bit too often as firefighters but this is the real deal when it comes to inaccessible,” said Dep. Chief Jonathan Cox of Cal Fire’s San Mateo-Santa Cruz unit.

Five hundred firefighters are working 48 hour shifts and they can’t be released with resources limited. They also can’t get assistance from any other part of the state.

“You are standing in your home you've been in for many years and you don’t know what to take,” said Eilis Burke of Loma Mar.

Burke is hopeful she has a home to return to after her family evacuated in Loma Mar. She’s learned from past wildfires in other jurisdictions to heed orders.

“We just never had anything like this here. It’s been happening in California for quite some time,” said Burke. “We are all safe and our animals are safe that’s as good as it can get right now.”

As of Wednesday night, new evacuation orders are in place for areas of Alba Road, Hubbard Gulch, Fanny Grade, and Davenport South in Santa Cruz County. Parts of Pescadero and La Honda in San Mateo County are also under new orders.

Evacuations centers are set up at the Santa Cruz County Fairgrounds and Santa Cruz Civic Auditorium as well as Half Moon Bay High School. 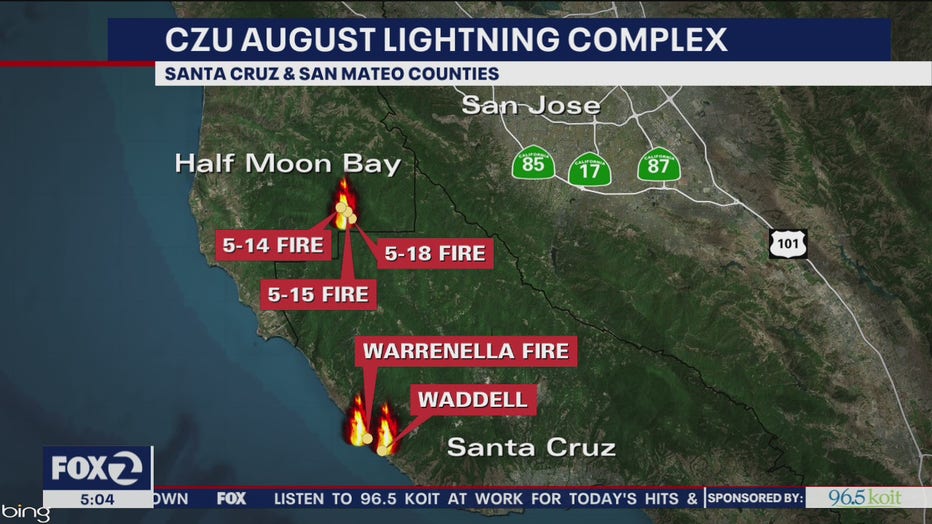 All areas adjacent to the Bonny Doon and San Lorenzo Valley should be prepared to evacuate if necessary. (CRZ7, CRZ8)

Highway 236 between Highway 9 and Jameison Creek

Highway 9 between Skyline and Western Avenue