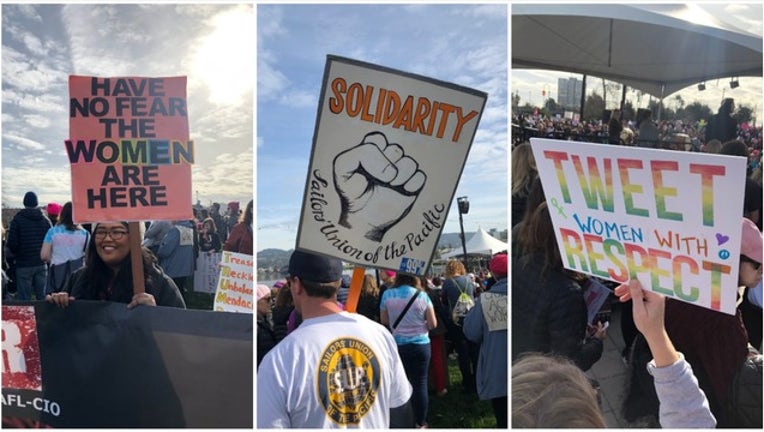 Supporters gathered at the Lake Merritt Amphitheater for a rally ahead a march to Frank H. Ogawa Plaza. Photo: Jason Appelbaum, KTVU.

(BCN) - Thousands are expected to turn out for women's marches Saturday in Oakland, San Jose and San Francisco, to rally and hear from dozens of speakers and performers.

After the San Francisco rally, the march begins at 1:30 p.m. from Civic Center down Market Street to Embarcadero.

In Oakland, a rally will be held at 10 a.m. at the Lake Merritt Amphitheater, on Lake Merritt Boulevard between 12th Street and First Avenue. At 11 a.m., marchers will head down 14th Street to Frank H. Ogawa Plaza outside Oakland City Hall, where a "Call to Action Alley" will be set up.

In San Jose, a march will start 11 a.m. at San Jose City Hall, with a rally to follow at Arena Green East. Rally speakers include State Treasurer Fiona Ma.

More on the San Francisco event can be found at https://womensmarchbayarea.org/logistics-san-francisco/

More on the Oakland rally and march can be found at https://womensmarchoakland.org/about-the-march

More on the San Jose march and rally can be found at  https://www.facebook.com/WomensMarchSanJose/